Is America really a ‘poor country now’, as Donald Trump continues to insist? 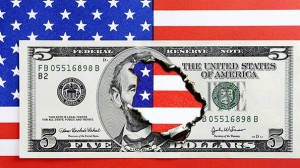 Donald Trump is talking balderash. America is not a poor country, not by any statistical logic or analytical reasoning. Consider the facts:

America’s economy is nearly four times bigger than in 1950. Quite apart from that, Americans’ standard of living is much higher than in the 1950s (despite growing social inequality).

Robert Gordon, an economist who teaches at Northwestern University, recently wrote ‘The Rise and Fall of American Growth: The US Standard of Living since the Civil War’. He points out that life has really changed from the time before World War II: antibiotics, television, aeroplane travel, air conditioning, appliances such as washers, dryers and microwaves.

As Robert Samuelson points out in The Washington Post, “True, there is stubborn poverty in America, but this does not deny our overall wealth. In 2014, Germany’s per capita GDP was only 84 per cent of the US level; that was better than Britain’s (75 per cent) and Japan’s (69 per cent).”

Donald Trump may be entitled to his opinion. But not his own facts.