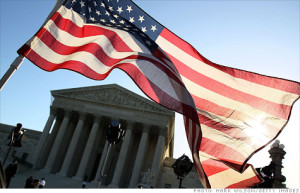 I remembered Robert Gordon, economics professor at Northwestern and author of The Rise and Fall of American Growth when I read that the wage gap in America grew in 29 of the last 42 years.

On Freaknomics recently, Professor Gordon went to great lengths to explain that he took a doleful view of America’s prospects not because, in Donald Trump’s words, “we’re not winning any more” but because of rising inequality. Professor Gordon meant the inequality of incomes and education and the downshifting in the quality of jobs, which simply reinforces that cycle.

Why does he think this inequality is impoverishing America? Because it prevents the US from making the best of the opportunities afforded by the ongoing so-called fourth industrial revolution.

The Professor, whose book charts the standard of living in America since the Civil War (1861- 65), believes that being competitive means spreading the wealth and the benefits of wealth – greater education and a greater ability to do less menial jobs. This is particularly key for America because its unparalleled growth in the 20th century should be read as a particular accident at a particular point of time. It is, says Professor Gordon, not likely to be repeated.

Professor Gordon explains it as follows. There was practically no progress in human life between the Roman Empire and the late Middle Ages.

The First Industrial Revolution, which began in the mid-18th century, saw the invention of steam engines, steam ships, locomotives, factories making cotton fabrics and the telegraph. The Second Industrial Revolution embraced electricity, the internal combustion engine, chemicals, plastics, running water, the conquest of infectious diseases, the conquest of infant mortality, processed food, clothes from department stores or mail-order catalogs. All of these happened mainly between 1870 and the early 1900s. From 1870, says the Professor, “the amount of time that it’s taken for the standard of living to double has been more like 30 years, not 350 years.”

But the Third Industrial Revolution, which began around 1960, with the first mainframe computer and continued through to the internet, doesn’t do much to increase the average person’s standard of living.

“Our total spending on all electronic communications and computer devices, on entertainment, on the services that provide us with Internet services and telephone services, you add that up and it’s only about seven per cent of the economy,” he says.

The Second Industrial Revolution and the collapse of Europe and Japan happened in quick succession – all of them successive and one-time events. American prosperity, he argues, may also be a one-time event.