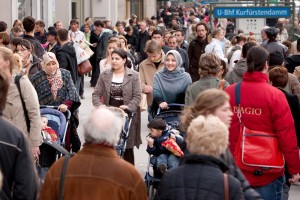 One month after the Brussels bomb attacks and it is official: Europe is caught in a destruc­tive cycle — the fear of terrorism and fear of Muslims.
A report on the health of democracy in post-Soviet Europe said that the continent’s biggest challenge is the spread of deeply illiberal politics. More particularly, the culture of Islamophobia.
The report carries a respectable stamp. Freedom House, the non-partisan Washington-based human rights advocacy organisation, was founded 75 years ago by, among others, Eleanor Roosevelt. The former US first lady went from the White House to become the first chairwoman of the UN Commission on Human Rights. Unsurprisingly, a Freedom House briefing carries considerable weight. So what are we to make of the dismal findings of its annual Nations in Transit report?
First, the facts. The report was not describing the state of the 28-member European Union but countries in Eastern and Central Europe, the Balkans and Central Asia. There is some overlap with the European Union, notably Hungary and Poland. But largely, the report lays out the contours of illiberalism and Islamophobia in a geographical area that does not cover Western and Southern Europe. Give or take a little, the report covers the territory described by the European Union itself as the “European Neighbourhood” and “Wider Europe”.
What a doleful state Freedom House has found. European politicians are reaping the bountiful harvest of sowing seeds of bitterness by “claiming that Europe faces a Muslim invasion”, according to the report’s Project Director Nate Schenkkan.
In real terms, this has meant the self-serving channeling of domestic politics into an anti-refugee silo with pronounced Islamophobic characteristics.
During Poland’s parliamentary elections in October, the influx of non-Christians representing values alien to an overwhelmingly Roman Catholic Polish society was frequently raised by right-wing politicians.
In Hungary, Prime Minister Viktor Orban’s government successfully amped up similar rhetoric, built a 164km, razor-wire fence on its border with Serbia to physically keep the alien invaders out and stymied the European Union’s attempts to introduce a Europe-wide refugee quota system. If this sounds like old news, consider the consequences of this paranoid fear and the stigmatisation of outsiders.
Like a spreading virus on both sides of the Atlantic, politicians who prescribe easy exclusivist answers are finding popular support and media coverage. Build a wall, crush the terrorists, protect the homeland and for God’s sake, keep out the Muslims, they say.
That message is serving like a radio jammer for more inclusive authorised scripts, which are in danger of seeming too old fashioned, perhaps even out of sync with the new reality.
It is why US Republican Party presidential front runner Donald Trump could bluntly declare, “I think Islam hates us”. And why his party rival Ted Cruz could brazenly prescribe “patrols” of Muslim neighbourhoods in the United States. Islamophobia is the reason Khairuldeen Makhzoomi, an Iraqi refugee in the United States who studies at the University of California, Berkeley, was removed from a domestic flight for having been overheard speaking Arabic.
It is also why French Prime Minister Manuel Valls was able to blandly conduct a public stream-of-consciousness debate about whether Islam could ever be “compatible” with French secularism. Interestingly, Valls’s focus was the hijab on university campuses, even though headscarves can hardly be equated with Islam.
In Britain, the virus mutated mid-April into an uglier strain. A Channel 4 documentary What British Muslims Really Think raised the truly hideous prospect that the country’s 3 million Muslims were literally a nation apart.
Trevor Phillips, who fronted the documentary, indicated that his findings were Muslims’ “innermost thoughts” and that these included cleverly concealed support for female subservience, suicide bombers and suchlike. Why, lamented Phillips, are the “views and values of many British Muslims still so out of line with the rest of society”?
This is dangerously dismissive of an entire community, which shares a faith but oftentimes little else. Like people of any faith community anywhere, British Muslims are of diverse ethnicities and cultures and with differing levels of education.
But Phillips’ question is a sign that the unsayable is becoming the norm and that it has particular cachet if it comes from someone such as Phillips, a former head of the UK Equality and Human Rights Commission, who, 20 years ago, published the country’s first report on Islamophobia.
In a tragic closing of the circle, Phillips is pandering to the very fear he identified. For some in Britain, other parts of Europe, Trump, Cruz and fellow Islamophobes in the United States, this is the tearing down of barriers of unnecessary political correctness. In fact, it is creating walls that keep out liberal values.
Original link