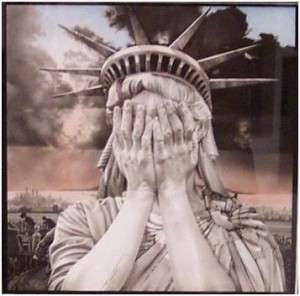 I’m only half-serious about mandatory Arabic-speaking-and-reading crew on all flights in America, but the fear is approaching ludicrous levels. On Thursday, a 40-year-old olive-skinned man with curly, dark hair, was the reason a domestic American Airlines flight was delayed by a couple of hours and returned to the gate.

The man, an Ivy League economist named Guido Menzio, had committed the following offence: scribbling differential equations into a notebook for a lecture he was to give in Ontario.

Mr Menzio’s seatmate – a 30-ish blonde woman – had been alarmed by the foreign lettering on which he was so focused. She had given a flight attendant a note to that effect.

Mr Menzio, an Italian, was questioned, “respectfully”. He was able to convince his interlocutors that he was writing mathematical equations, not plans in Arabic to blow up the plane.

The incident comes just a month after Khairuldeen Makhzoomi, an Iraqi refugee in the US who studies at Berkeley, was removed from a domestic flight for having been overheard speaking Arabic. (He was, for the record, overheard saying “Inshallah”, which means if God wills.)

Why is this happening, why now, and what can be done about it?

Mr Menzio, who spends his life looking for logical reasons to problems large and small in our unquiet world, told The Washington Post by email that he was troubled by the ignorance of his fellow passenger. He also said he was uneasy about “a security protocol that is too rigid – in the sense that once the whistle is blown everything stops without checks – and relies on the input of people who may be completely clueless.”

But he offered another interesting observation as well. That rising xenophobia stoked by the ongoing American presidential campaign, will make things worse for people who happen to look different. (Or, let’s face it, swarthy. Or Middle Eastern. Or, like me, brown and possibly linked to some unsavoury types somewhere? Or, holy moly, someone with a driver’s licence that reads “Barack Hussein Obama”)

Mr Menzio’s email to The Post said the following: “What might prevent an epidemic of paranoia? It is hard not to recognize in this incident, the ethos of [Donald] Trump’s voting base.”

So, here’s the only possible solution (and I’ve allowed for the possibility of a ‘President Trump’):

–   every flight, domestic or international, that originates in the United States, should have an Arabic-speaking-and-reading crew member on board. Preferably two or three. One in first/business class. One at the front of economy and one at the back. This would quickly and effectively quiet the fears of passengers worried about foreign-looking writing they see and Arabic words they overhear, and so on

–   there are 30,000 flights per day in the US on average and finding enough Arabic speakers and readers for each might be difficult. So, they must be imported from Arabic-speaking countries

–   in case of a ‘President Trump’, with his promised ban on Muslim entry into the United States, the only solution would be to recruit Christian Arabic speakers. There are, thankfully, lots who would fit the bill among Palestinians, Jordanians and the Lebanese.

It might, however, be a tough call to persuade anyone who looks foreign to come to an America that is so scared of the ‘other’, they find mathematical equations and peaceable phrases such as “inshallah” simply terrifying. Enough to halt planes and force innocent passengers to be interrogated.