Racism is a clear and deadly reality in India

India has a problem with racism. It suffers from it. And it practises it. For the second time in less than three months Indian officialdom is scrambling and occasionally backsliding on attempts to explain away the latest attack on Africans – a murderous assault on a 29-year-old Congolese French language-teacher in Delhi. Masonda Ketanda Olivier died.

Something similar happened a few months before. In February, there was a mob attack on a Tanzanian student in Bangalore. The young woman was stripped and paraded in front of onlookers. She subsequently accused India of “ingrained racism” as did her country’s envoy. That time, the Indian government created a Police-African Students Community platform, for regular “interaction … so that similar incidents do not occur again”.

They did, and this time, Indian foreign minister Sushma Swaraj herself tweeted that a “sensitisation programme” would be launched to prevent “such incidents against foreign nationals [that] embarrass the country”.

She didn’t provide details and it’s worth noting that she didn’t use the “r” word either, but there we have it. India is embarrassed by the focus on its racism. It would rather the problem just went away. Except that it can’t because it’s real.

Many Indians do behave in a racist and occasionally a violently racist fashion to people darker-skinned than them. There are insulting names for Africans, African-Americans and Caribbeans, all of whom may be jokily referred to as “bandar” (monkey) by grinning urchins and yokels. And there is the now-derogatory term “habshi”, a corruption passed down through the ages of the word “Abyssinian”. Back in the 1990s, a black BBC reporter on assignment in India described the monkey taunts that accompanied his passage through a small town. He was alternately appalled and amused but didn’t come to any harm. That was before the age of social media, when racist excesses didn’t easily become an “embarrassment” on the international newsfeed.

Not so the killing of the Congolese teacher. And the next assault, within days, on a handful of Africans – including a student, a priest and his wife and baby – in a village close to the capital Delhi. They were not isolated incidents. There have been several across the country and some Indian newspapers have detailed the perpetrators’ lack of remorse and their criticisms of Africans’ perceived drunkenness and depravity.

Last week, it got to the point that African diplomats spoke out. They took the unusual step of seeking postponement of the Indian government’s big-ticket Africa Day event. Eventually, most of them turned up but not without issuing a rebuke. They said they were considering asking their governments “not to send new students to India, unless and until their safety can be guaranteed”.

The implications are enormous – in terms of PR, politics and trade. India wants to build new relationships with African countries in an attempt to influence a whole generation and have more sway on the continent than China. Prime minister Narendra Modi has instituted extra partnerships to bring Africans to India to study or to train. In the past three years, 25,000 Africans have studied in India.

The new controversy could not have come at a worse time. Mr Modi is soon to travel to Africa. In October, his government hosted the India-Africa Forum, which was attended by all 54 African countries and seen as a success. Everything seemed to be going well in India’s bid to secure African good wishes as it still lobbies for status as a UN Security Council permanent member.

And yet, it’s hard to see a real partnership emerging when, as Nigeria’s acting high commissioner Sola Enikanolaiye put it, notions of brotherhood and solidarity “ring hollow”. The unstated reference is to the hollowness of India’s professed warmth towards Africans and the solid reality of its racism.

It has often been noted that Sonia Gandhi would have been less acceptable as an Indian daughter-in-law had she been from Uganda, not Italy. That was true back then, nearly 50 years ago when the young Sonia Manio married Rajiv Gandhi, and it remains the case today. This is largely because many Indians like the “fair and lovely” template and are prone to thinking of blackness as ugly and a sign of backwardness.

It’s noteworthy that Mahatma Gandhi, product of an age of racial hierarchy, displayed this attitude throughout his time in South Africa. According to a recent book by two South African academics, the Mahatma regarded black people in much the way Winston Churchill regarded him. Churchill called the leader of the Indian freedom movement a “half-naked fakir”. Gandhi, according to authors Ashwin Desai and Goolam Vahed, said black Africans lived a life of “indolence and nakedness”.

But racism towards Africans also has deeper, more disturbing roots. In India, darker people are associated with the lower castes and Africans in India suffer from society’s long-held prejudices.

This does not mean India can do little about the seemingly racist strand within its DNA. Racism is taught, it is learnt behaviour towards persons with dissimilar physical characteristics, American writer Alex Haley once said. For India to unlearn it, the propensity to be racist must first be identified by the right name. And then fought hard. There must be severe punishment for racist violence and societal disdain for covert (or overt) racism.

It won’t be easy and will take a long time. But that may be better than seeing racism as a mere embarrassment. 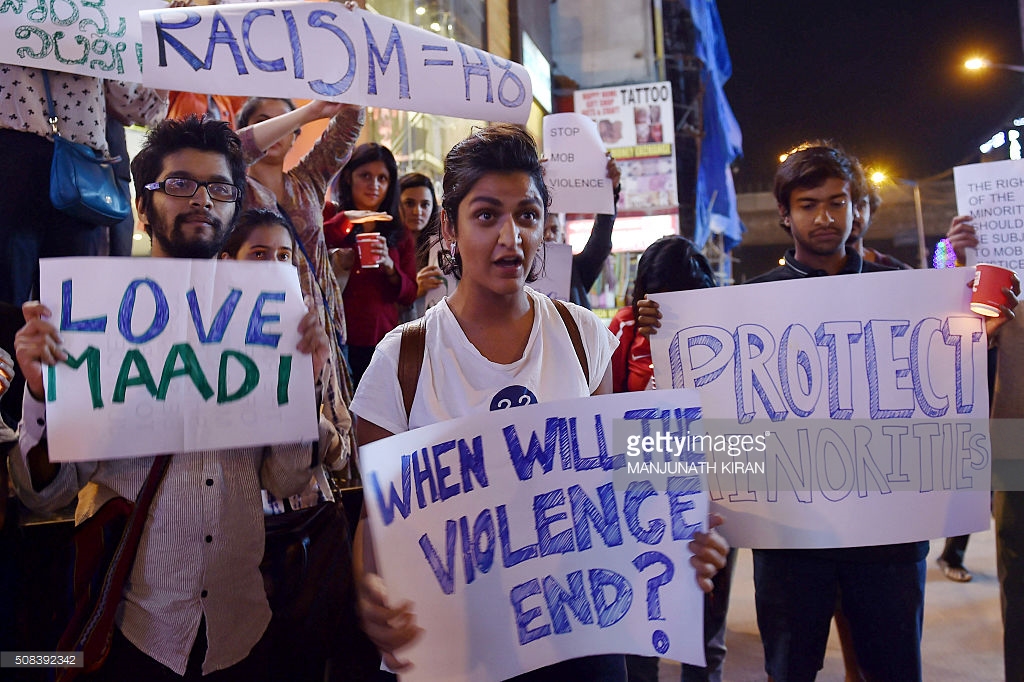