Narendra Modi made his fourth trip to the United States as India’s prime minister this week, a personal triumph of sorts for a politician once denied an American visa on the grounds that his record in regional government was pockmarked by violations of religions freedom. Mr Modi failed to stop a series of deadly riots against Muslims.

But however much the publicity-savvy prime minister’s team spins his seventh meeting in two years with Barack Obama and his Wednesday address to a joint session of the US Congress, this moment is not really about Mr Modi. Mostly, it revolves around China, or at least American attempts to prevent it from dominating the Asia-Pacific region. And in according Mr Modi the honour of addressing Congress — he is only the fifth Indian prime minister to do so — America’s often-fractious political establishment is underlining its solid bipartisan support for a 16-year-old bridge-building process with the world’s most populous democracy.

Three successive US administrations have steadily worked at the relationship with India, making allowances for its postcolonial prickliness, its socialist non-alignment, its reluctance to bend the knee to a superpower and its fits of jealousy about the heed paid to Pakistan.

Mr Obama has offered support to India’s bid for a permanent seat on the UN Security Council and indicated that America backs India’s participation in the 48-member Nuclear Suppliers Group. It would be too much to say that we are seeing the US-India equation evolve into an indispensable relationship. But it is clear that it has acquired the comfortable, if unexciting, constancy of a long-term arrangement.

This is unlikely to change no matter who wins the US presidency come November. It says a great deal about the stability of the bilateral relationship that the Indian foreign policy establishment is divided on who would be better for India — another Clinton in the White House or that unknown quantity, a president Trump.

Some incline to the latter because of Mr Trump’s loud hostility towards China. Others see Mrs Clinton, who was at her husband’s side in India as first lady in 2000, as more likely to boldly take the relationship further forward.

How did this sanguine state of affairs come about? Not because of an irresistible attraction. Relationships between countries, much like those between people, often exist in the doleful zone described by reggae star Bob Marley as follows: truth is, everybody is going to hurt you; you just gotta find the ones worth suffering for. That both the US and India seem to find each other worth suffering for, highlights the third entity in the relationship: China.

Beijing’s new maritime assertiveness in the Asia-Pacific and Indian Ocean regions has greatly alarmed the US, India and other countries.

India worries about increasing Chinese submarine stand-alone missions in its maritime neighbourhood; Japan is at loggerheads with China in the East China Sea and the Philippines, Brunei, Malaysia and Vietnam contest China’s expansionist claims in the strategically vital South China Sea, through which half of India’s trade passes as well.

Though one of these disputes — Beijing vs Manila in the South China Sea — will be ruled on by an international tribunal in The Hague later this month, the rest are not so easily dealt with. Thus, India now looms large in every American assessment of how best to address Chinese presumption in “the Asian commons”, as America’s envoy in India Richard Verma put it.

Accordingly, last month, India and the US held their first maritime security dialogue and the starting point was increased Indian naval engagement in the Indian Ocean and South East Asia.

In October, there was proof of an emerging triangular partnership when the Indo-US naval exercise “Malabar” in the Indian Ocean included Japan for the first time in eight years. Unsurprisingly, Beijing read the sea spray correctly and called it out as an attempt to build an anti-China coalition in the region.

American eagerness to help India keep the peace has only been matched by its partner’s eagerness to enter into joint defence production and buy up stocks of sophisticated weaponry. India’s aggregate defence acquisitions from the US now total more than $13 billion (Dh47 bn).

This is weighty stuff and quite enough to build a partnership between two countries prone to pointing out they are the world’s biggest democracies. But is it enough?

Sixteen years on from when Bill Clinton came courting, there is a sense that the relationship has settled too quickly into the sensible zone, without the frisson of new possibilities. At least some of this is to do with the perception among US politicians that India remains unwilling to commit.

’Twas well said that there is always some madness in love, but there is also always some reason in madness. For a real India-US love fest, the reasoning has to go beyond shared concerns about China. 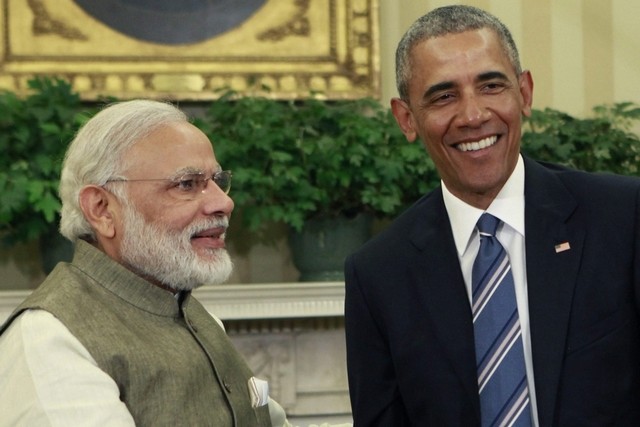