The tabloid case for Brexit

The world changed dramatically with Britain voting to leave the European Union after 43 years as a member. The chief shock is not the international horror — like a long scream in slow motion — the falling stock markets, plummeting British pound and the fact that Brexit happened at all. It is this bald truth: The main trigger of this tragic and complex divorce was a deep fear of immigration.

Those who campaigned for Brit­ain to leave the European Union stoked anxiety by falsely claiming that the country risked being for­ever changed by floods of refu­gees. They hinted at a dark EU plot to fast-track Turkey’s membership application and swamp Britain and other parts of Europe with 70 million Turks. They suggested that British towns and villages would start to look like those in Romania and Syria. They warned that scarce jobs and government services would have to be shared with undeserving foreigners.

It worked. The emotional ap­peal or what might be called the tabloid case for Brexit resulted in a decisive vote. The Leave campaign won by a margin of four percentage points, which can justifiably be said to be a plain instruction from the British people. It is important to be clear what they were saying and why. The British decision was not about square tomatoes or other absurd parodies of EU over-regulation. It was about fear of the other.

We should have seen this com­ing.

On June 16th a British member of parliament was killed — the first such incident in more than a quarter century — allegedly by a man who shouted “Britain first” before and after the attack. It was a bloody illustration of the toxic consequences of a political cul­ture of migrant and Muslim-bash­ing. The political consequences would become apparent a week later with the Brexit vote.

Britain First is the name of a British political group. It opposes what it calls the Islamisation of the country and says that it is “a patriotic political party and street defence organisation”, with all the unsubtle and violent implications of such a self-description.

The group has denied links to Thomas Mair, who has been charged with killing MP Jo Cox. Britain First, however, is exactly the sort of sectarian outfit that is aggressively at work radicalis­ing white people in the United Kingdom.

The group, which viciously rejects Muslim participation in British public life, responded to Sadiq Khan’s election as mayor of London by complaining that the result showed there are “far too many Muslims (and a) shrinking number of Britons”. During the mayoral vote count, Britain First’s leader conspicuously and humili­atingly turned his back on Khan.

So, too, the EU referendum campaign. Britain First and the UK Independence Party (UKIP) turned it into a hate-filled plebi­scite on immigration and Mus­lims, while adopting a threatening tone towards those who advocate engagement.

Cox was an advocate of an in­clusive and multicultural Britain. She was well known for her ad­vocacy of refugees and migrants and, in particular, for her embrace of Syria’s harried children. She was campaigning for Britain to vote “remain” in the EU referen­dum.

Both issues were cynically conflated by politicians peddling paranoia. Consider the public pronouncements of some of the Leave campaigners. Business­woman Arabella Arkwright, who served on the “vote leave” board, promoted anti-Muslim mate­rial on social media as the prime reason to decouple from the European Union. This included an image of a white girl in the middle of a group of people wearing bur­qas with the stark tagline: “Britain 2050: Why didn’t you stop them Grandad?”

Might that sort of dark insinu­ation about a ceaseless tide of refugees possibly bound for Britain serve as a trigger for violence?

It was denounced as “a step too far” by Baroness Sayeeda Warsi, a prominent Muslim politician who once led the governing Conserva­tive Party and defected from the Leave campaign saying she was appalled by the “lies… hate and xenophobia”.

That tactic proved dreadfully effective for all that there appears to be a thin dark connecting line between a political campaign of bigotry, Cox’s brutal death and the fear-ridden surprise decision to leave the European Union. 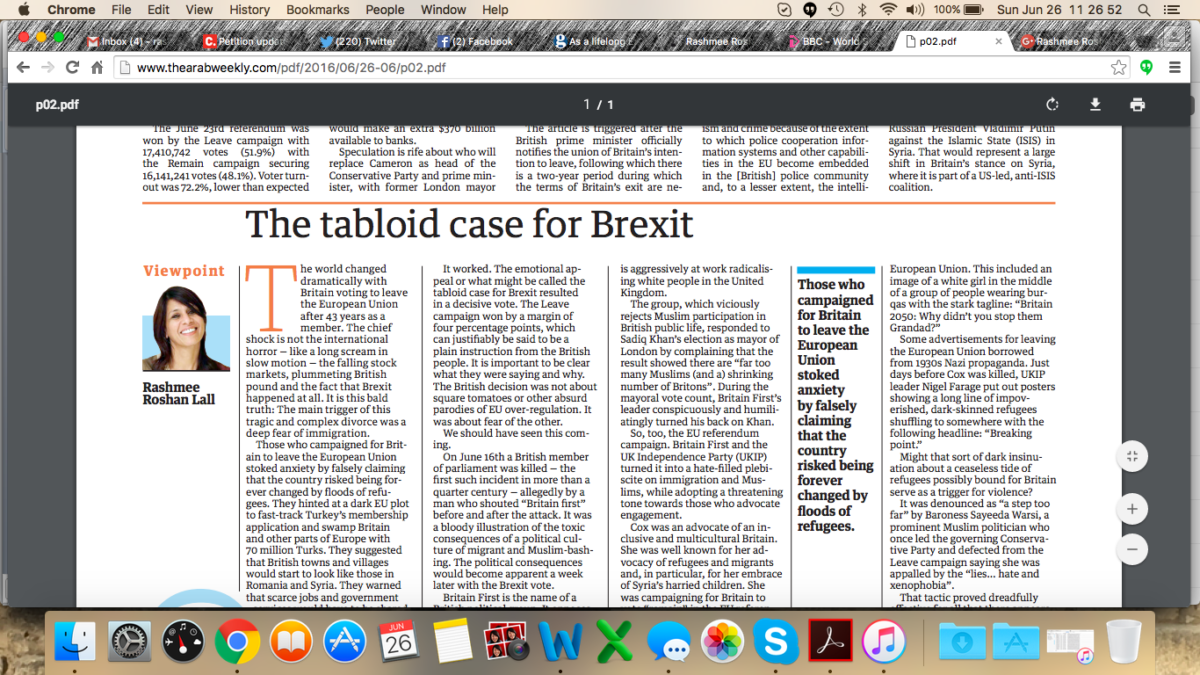