American writer George Saunders on Trump & what he calls ‘Trumpmunity’

George Saunders is one of my favourite short story writers, which is why it’s a treat to have him write, in real time, on a contemporary issue of global importance.

The rise of Donald Trump. The possibility that Mr Trump becomes US president. What the Trump phenomenon – its occasional vulgarity, violence and vicious whingeing tone – means for America and for people around the world.

And here he is, George Saunders, with a 10,000-word piece in The New Yorker. Click here to read it.

Mr Saunders doesn’t disappoint. He writes of a polarized America:

“Where is all this anger coming from? It’s viral, and Trump is Typhoid Mary. Intellectually and emotionally weakened by years of steadily degraded public discourse, we are now two separate ideological countries, LeftLand and RightLand, speaking different languages, the lines between us down. Not only do our two subcountries reason differently; they draw upon non-intersecting data sets and access entirely different mythological systems.

“You and I approach a castle. One of us has watched only “Monty Python and the Holy Grail,” the other only “Game of Thrones.” What is the meaning, to the collective “we,” of yon castle? We have no common basis from which to discuss it. You, the other knight, strike me as bafflingly ignorant, a little unmoored. In the old days, a liberal and a conservative (a “dove” and a “hawk,” say) got their data from one of three nightly news programs, a local paper, and a handful of national magazines, and were thus starting with the same basic facts (even if those facts were questionable, limited, or erroneous). Now each of us constructs a custom informational universe, wittingly (we choose to go to the sources that uphold our existing beliefs and thus flatter us) or unwittingly (our app algorithms do the driving for us). The data we get this way, pre-imprinted with spin and mythos, are intensely one-dimensional.”

And he ends with this reflection:

“Trump seems the very opposite of a guardian angel, (but) I thank him for this: I’ve never before imagined America as fragile, as an experiment that could, within my very lifetime, fail.

“But I imagine it that way now.”

George Saunders in real time is absolute bliss, especially if you remember ‘Tenth of December’, Mr Saunders’s three-year-old collection of short stories. Bliss too if you’ve read ‘The Semplica Girl Diaries’, which is part of the ‘Tenth of December’ collection. For those who aren’t au fait with the concept of SGs as Mr Saunders calls the Semplica Girls, these are human lawn ornaments imported from poor countries to decorate American yards. The story is deceptively simple and brutally real. The SGs are grouped in the gardens of wealthy Americans, connected by “microfiber” lines that pass through their brains. A middle-class American family, which hopes one day to become “rich”, buys SGs to please one of their daughters. It’s how one keeps up with the Joneses. One of their other children, a sensitive little girl named Eva, sets the SGs free, a felony that will result in two other terrible results: forcing her family into debt and rendering the microfiber-linked SGs as good as dead (they have been turned loose as fugitives in America without money, food, water, shelter).

‘The Semplica Girl Diaries’ is really about the American Dream, class envy, materialism, the capitalism and coercion.

It is about morality and how we can bear to live with ourselves.

This is why George Saunders on Trump and what he calls “Trumpmunity” is so deep and troublingly simple. As Saunders writes: “His notions are so low and have been so many times decried, and yet they keep arriving, in new and escalating varieties, and the liberal imagination wilts.” 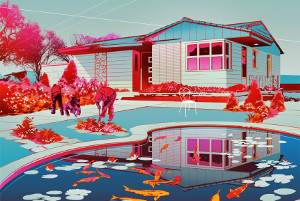