Trump’s policies won’t make any of us safer

A week ago, a French Tunisian killed at least 84 people using the most mundane weapon of mass destruction possible – a lorry, which he drove deliberately into meandering crowds along the seafront in Nice.

On Monday night, an adolescent in Germany of Afghan or Pakistani origin attacked passengers on a train with an axe and a knife. Both immigrants were said to have been self-radicalised ISIL supporters. Their actions have served as promotional fodder for Mr Trump, who describes himself as the law-and-order candidate for the highest office in America.

The attacks have also amplified a visceral public fear that violence is possible anywhere and especially in any place there are immigrants.

Cue Mr Trump’s putative role as America’s strongman. He has sworn to be unremittingly tough on terror. The first day of his party’s nominating convention in Cleveland was themed “Make America Safe Again”. Successive speakers railed against undocumented immigrants, whom they called “illegal aliens”, for killing their loved ones. A former Navy Seal declared “the world outside our border is a scary place”.

The congressman who chairs the House homeland security committee claimed America was “in the crosshairs” and it was time to call out the enemy by its real name, “radical Islam”.

All of this was familiar territory for Mr Trump’s supporters. Their candidate has promised to keep America safe with a range of measures that go from puerile to provocative. He has said he will defy norms of political correctness and work around America’s constitutional prohibitions on religious discrimination. Accordingly, Muslims seeking to enter from designated “terrorist areas” will face summary rejection. A president Trump would ask Congress to declare war on ISIL.

It will be the War on Terror Version 2.0, Mr Trump’s reprisal of George W Bush’s catastrophic campaign. It enjoys similar, rather distant odds of success and runs the same risks of leaving the world less safe and people feeling more divided and vulnerable. And yet, nearly 15 years since the start of that war on terror, there are signs a new iteration might be politically advantageous. and not just to Mr Trump’s base vote.

A recent Quinnipiac University poll showed that voters in three key swing states – Florida, Ohio and Pennsylvania – viewed Mr Trump as more effective than his Democratic Party opponent Hillary Clinton when it comes to fighting ISIL. The reasons are self-evident. Version 2.0 plays well to American voters. Terrorism and security are high on the list of people’s concerns even though this stage of the presidential election cycle would normally be focused on pocketbook issues. Nice has followed a troublingly familiar pattern – Paris, Brussels, San Bernardino, Orlando. Turkey’s baffling failed coup on Friday added to anxieties over an uncertain world. America’s surging domestic racial violence, with police shootings in Dallas and Baton Rouge, has fed the fear and worry.

In a pre-emptive response, Mr Trump has promised to build a wall along the Mexican border, limit immigration, monitor Muslims already in the US, brandish nuclear weapons against troublesome countries and protect Americans’ right to bear arms.

In the week after the Nice massacre, some of these tough, laissez-faire promises might sound appealing, especially to people in shock. One example is allowing the proliferation of weapons, including assault rifles. The gun lobby argues that a weapon may not prevent pedestrians from certain death under a runaway lorry, but might allow bystanders to stop the driver from causing greater carnage.

A wall along America’s border with Mexico wouldn’t accomplish much, but it would undoubtedly send a message of toughness. Ditto nuclear weapons. And a moratorium on Muslim entry. Mr Trump wants to be seen, as his vice-presidential pick Mike Pence, puts it, as the embodiment of “broad-shouldered American strength”.

That may be, but unfortunately, almost all of Mr Trump’s war gaming seems destined to be useless if not downright dangerous. Walls, weapons on the streets and exclusionary policies can only contribute to feelings of isolation and paranoia. They cannot protect against lone-wolf terrorist attacks and may actually feed some of the rage that inspires them.

In the longer term, the blowback may prove as corrosive for the United States as did the original war on terror. The US is saddled with a hateful reputation abroad – of talking human rights but denying them; waterboarding detainees; incarcerating them in the hellhole that is Guantanamo Bay; flip-flopping on Afghanistan and Iraq; using drones to kill suspected terrorists and innocent civilians in Pakistan; weeping over the plight of the Palestinians but doing little to ensure they are no longer stateless.

In the short term, of course, there is little clarity on how Mr Trump would make war on ISIL. He has told the CBS network’s 60 Minutes programme that it would take “very few [American] troops on the ground”, “unbelievable intelligence”, and help from “surrounding states”, Nato and “incentivised” Turkey. This would be more believable had he made some mention of the ideological fight as well. For the real battle is about limiting the spread of an extremist world view, one that can inspire troubled loners such as the Bastille Day attacker to commit mass murder without training and resources. 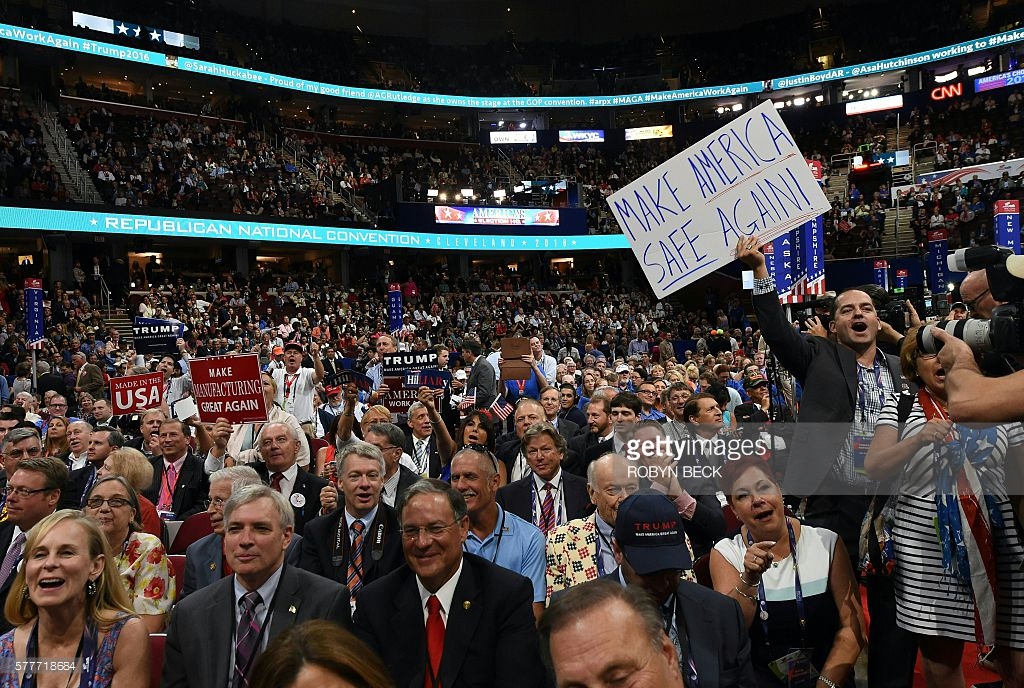