The Refugee Olympic Team is an inspired gimmick and, like any novelty item, it is likely to become less interesting the longer it hangs around. Would #TeamRefugee offer the same frisson — of shock and awe at human suffering and strength — in Tokyo 2020? Will the refugee team be considered as interesting a story at the end of Rio 2016 as it was on the Games’ opening day?

Probably not. And yet, the refugee team is a simply remarkable construct. In representing the world’s displaced and dispossessed, it underlines the magnitude of the refugee crisis, estimated to be running at 60 million people.

The team’s composition — five of the ten members have found refuge in Kenya and two in Brazil — debunks one of the chief myths propagated in and about the Western world.

Europe, the United States and Australia are often led to believe that they are the main destination for asylum seekers. In fact, less developed countries receive more than 80% of the world’s refugees. Most of the planet’s poor and harried people may want the chance of a prosperous settled life in the West but the majority does not get there.

According to the UN refugee agency, as of mid-2015, Turkey hosted the most refugees (1.84 million) on its territory, Pakistan was second with 1.5 million refugees and Lebanon third with 1.2 million. Bureaucracies are not noted for having epiphanies but the refugee team’s creation is one of them. It must have been an inspired moment when the International Olympic Committee (IOC) came up with the plan four months ago, creating a $2 million training fund and shortlisting dozens of refugee athletes.

The refugees on the team, IOC President Thomas Bach said, “have no home, no team, no flag, no national anthem. We will offer them a home in the Olympic Village together with all the athletes of the world”. He added that the team was “a signal to the international community that refugees are our fellow human beings and are an enrichment to society”.

This would be a fine statement of humane purpose if it truly represented global unity on a fraught issue but it does not. The world is anything but united on the question of refugees. This profound disharmony goes much beyond the inflammatory rhetoric employed by populist politicians such as American presidential hopeful Donald Trump, France’s Marine Le Pen and Australia’s Pauline Hanson against refugees, especially those of the Muslim faith.

Sixty-five years after the UN Refugee Convention was approved, responsibility is shared patchily and petulantly, without a proper plan or purposeful worldwide strategy. Refugees — the majority of whom flee Syria, Afghanistan, Somalia and South Sudan, in that order — are unable to access meaningful protection without resorting to people traffickers, asylum shopping and dangerous and illegal journeys towards safety. Destination countries, meanwhile, are unable to keep refugee resettlement numbers in line with their own security concerns.

This allows the Trumps and Hansons of the Western world to describe refugees in poisonous terms, a narrative that is picked up and disseminated elsewhere. Just days ago, Trump said SomaliAmericans, mainly in Minnesota and Maine, were “a rich pool of potential recruiting targets for Islamist terror groups”. Hanson, who became one of Australia’s most powerful politicians with her election to the Senate and that of three other members of her One Nation party, has compared Muslims to “pit bull terriers… a danger to our society”.

This sort of burn-them, flogthem, hang-them flow of invective will not cease while the 1951 Refugee Convention remains a partial principle rather than a shared practice. So what is to be done?

One of the world’s leading authorities on international refugee law, Michigan Law School Professor James Hathaway, recently presented a paper on how to fix the system. Citing five years of efforts by a team of lawyers, social scientists, non-governmental activists and governmental and intergovernmental officials drawn from all parts of the world, he suggested a new approach to “implementing” the convention, as opposed to simply suffering it.

This included requiring all countries to sign on and for a revitalised UN High Commissioner for Refugees to administer refugee quotas, with the authority to allocate funds and refugees. Hathaway argued for a common international refugee status determination system. This would mean an offer of asylum wherever there is room at the time and not according to the countryof-first-arrival norm.

If, as Hathaway said, there is “no necessary connection between the place where a refugee arrives and the state in which protection for duration of risk will occur”, it would snap the link between smuggling routes and asylum claims.

A complete reassessment of the Refugee Convention is an Olympian task. Would that the Refugee Olympic Team inspire it. 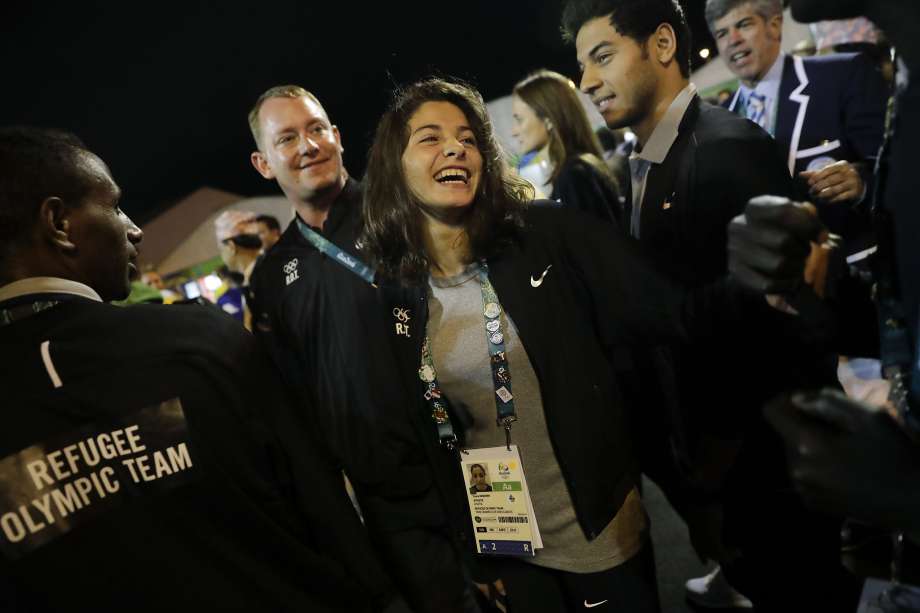