As Colombia’s peacetime starts, Norwegian who helped says he no longer wears a watch

From today, the Colombian government and the Revolutionary Armed Forces of Colombia (Farc) are officially no longer at war. After 52 years, the prospect of peace is alluring. But a referendum – and many possible missteps – could stand in the way.

Whatever happens, the contribution of one man – a Norwegian diplomat who’s spent the best part of a decade in Havana, Cuba for the peace talks – stands out.

In the process, Dag Nylander is so changed by the habits of the Colombians he’s had to live among, he no longer wears a watch.

“I have a couple of Colombian or Latin American elements in me now,” Mr Nylander told the BBC’s Will Grant. “Even to the point of turning up late for meetings which is permissible in Latin American culture but doesn’t really work in Norway.”

Click here to read Grant’s piece on Mr Nylander, head of the Norwegian diplomatic team which – along with the hosts, Cuba – acted as guarantors for the Colombian peace process.

What is extraordinary about Mr Nylander’s account of the years the peace process dragged on is the fascinating insight it provides into the warp and woof of negotiating to end a war, a conflict till recently, was routinely described as Latin America’s longest.

The actual talks in Havana ran four years, but as Grant writes, for Mr Nylander and other key participants, it was probably closer to six because the secret preparatory talks started a couple of years before November 2012.

Over those long hard years, Mr Nylander lived in a hotel in Havana, a difficult way to have a home in a foreign country, not to speak of the 24/7 year-round, year-in-year-out job of sketching the contours of peace on a far-distant horizon for Colombians divided by a conflict that began so long ago many people weren’t even alive at the time. 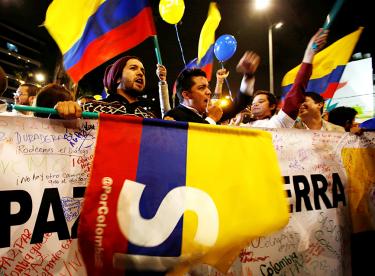