France vs France. Two views of burqini debate and what it might mean for the republic 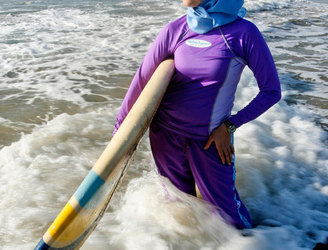 Dominique Moisi, a professor at L’Institut d’études politiques de Paris and senior adviser at the French Institute for International Affairs describes the support he has noticed among his fellow citizens for the burkini ban.

“I myself was on a French beach recently – one where the burkini has not been officially banned – and watched people’s appalled and scornful reactions to a covered Muslim woman splashing in the sea with her family. I even heard a young man announce that the image made him want ‘to shoot them all.’ France’s diverse and open society has clearly fallen far.”

And then there’s Noëlle Lenoir’s explanation of the way many French people currently feel. She is a former French minister of European affairs, currently runs a think tank and heads the the European Institute at the Hautes Etudes de Commerce in Paris. Ms Lenoir writes:

“With France’s strong culture of feminism, many French citizens consider gender segregation and face covering to be repressive, even when they are said to be a woman’s choice. France has a history of welcoming immigrants, especially between the two World Wars; but it has never before been confronted with attitudes and behavior that not only violate its constitutional principles, but openly defy them.”

She goes on to provide the following statistical data: Roughly 8 to 9 per cent of France’s 66 million citizens are Muslim. Half are believed to be younger than 24. “Most French Muslims are not new arrivals,” she writes, but part of the third generation of the 1960s immigration wave.

Both Professor Moisi and Ms Lenoir share a deep fear about the future of France. The professor worries about the possible rise of France’s Donald Trump – not Marine Le Pen of the far-right National Front but Nicolas Sarkozy, who could stoke the people’s fear of terrorism and cultural takeover and turn France into a country it might not itself recognize.

Ms Lenoir, meanwhile, is also worried about rise of the far right after the “the heinous crimes perpetrated in France over the past two years by disenchanted young Muslims who had embraced radical Islam.”

She writes: “Against this backdrop of collective trauma, many French citizens believe that the survival of the Republic itself is at stake.”

So what is to be done?

It’s striking that neither Professor Moisi nor former minister Lenoir offer any real solutions. Perhaps there isn’t one to take down from the shelf. It’ll have to come into existence slowly, over time, as France and all its citizens feel their way to the future.