‘What is Aleppo’: A nothing on grand scale of American ignorance 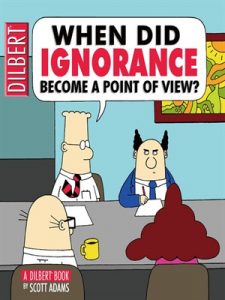 Anyone still surprised at or smirking about the ignorance on Aleppo displayed by American candidate for president Gary Johnson should take a look at choice examples of US statecraft and policymaking.

Just more than 25 years ago, George H.W. Bush, the United States’ 41st president, was advised by senior aides to accept Saddam Hussein’s invasion of Kuwait because, so the argument went, the electorate would not care about a country of which it had never heard. No one, said the aides, would even notice the change from one Arab strongman to another. Pulitzer Prize-winning American author Daniel Yergin described Bush aides’ magnificent logic in his 2011 book The Quest: Energy, Security, and the Remaking of the Modern World.

As it happened, Bush ignored the argument but the fact that it was advanced at all says a great deal about American ignorance and the extent to which it plays a part in political calculations.

US President Barack Obama recently acknowledged his countrymen’s cluelessness while in Laos for the Association of South-east Asian Nations (ASEAN) summit. “If you are the United States, sometimes you can feel lazy and think, you know, ‘we’re so big, we don’t really have to know anything about other people’,” Obama said.

Consider the Himalayan heights of Americans’ lazy ignorance about the world. Fifteen years after 9/11 and the invasion of Afghanistan, many still consider it to be an Arab and Middle Eastern country rather than in south central Asia. On my way from Washington to Kabul a few years ago, I remember being aghast at some US officials’ stated belief they needed to learn Arabic to make themselves understood in Pashto- and Dari-speaking Afghanistan.

Even Pakistan, which is squarely in South Asia, is sometimes referred to as part of the Middle East. This is largely on account of Americans’ general incomprehension of Islam as a world religion, Arab as a racial category and the reality that Muslims live in different countries all over the world, not just in the Middle East.

A 2011 Pew Research Center survey indicated that 42% of Americans correctly identified the crescent and star with Islam from a set of four religious symbols including the Christian cross and the Star of David. Ordinary Americans, their political representatives and counterterrorism officials have repeatedly displayed profound ignorance about the difference between Shia and Sunni Islam. A 2008 poll by Newsweek magazine had 39% of respondents acknowledging they did not know which sect represented the majority of Muslims worldwide. A scant 20% correctly identified the Sunnis as the largest group. In 2014, Pew discovered that only 29% of Americans asked knew enough to pick Iran as the Shia-majority nation from a list of four.

This followed a stubborn and predictable chain of ignorance that stretched all the way up to the very top of US intelligence and law enforcement, as well as legislators with oversight of security matters. Ten years ago, in his role as national security editor at Congressional Quarterly, Jeff Stein wrote about his revealing, if dispiriting, straw poll of American officialdom and policymakers’ basic general knowledge of Islam. From the head of the FBI’s national security branch to the vice-chairman of a House intelligence subcommittee, he found little clarity about core concepts.

It may be reasonable to assume that things have not changed much in the last decade. Not because the 2016 US presidential election has thrown up this embarrassment — third-party candidate Gary Johnson’s lamentable ignorance about Aleppo, Syria’s largest city, the epicentre of the country’s civil war, a time capsule of culture and man’s footprint on our planet. Johnson heads the Libertarian Party ticket, has almost consistently polled less than 10% among American voters and has no serious chance of ever getting to the White House unless it is as a marijuana advocate.

But there is probably no greater manifestation of proud and ignorant American cluelessness than the candidacy of Donald Trump. He has consistently advocated defiantly wrong-headed and misinformed policies. That the presidential candidate of one of America’s two major parties should advance illegal and ethically dubious measures — killing extremists’ families, the torture of suspected terrorists, seizure of the oil wealth of an invaded country and an ideological test for visa-aspirants to the United States, to name a few of Trump’s prescriptions for America’s ills — is proof that many American voters do not see ignorance as disqualifying their leaders.