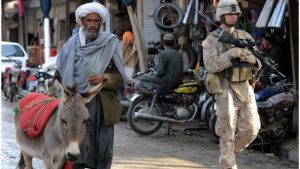 The European Union says ‘no’, but a newspaper report has said that the two-day aid summit in Brussels starting October 4 will be “migration sensitive”. This basically means Afghanistan must agree it will take back 80,000 deportees in order not to lose billions of dollars of aid.

There are two good points to make about this alleged quid pro quo and two very bad ones.

** It’s best for the EU to be candid about what it wants.

** It’s hardly inappropriate to put Afghanistan on notice. No country can endlessly expect to hemorrhage people, suck in the big bucks of international aid and remain disunited and ungovernable.

Now, for the bad.

** The security situation in Afghanistan is worsening, which is at least part of the reason that Afghans make up the second largest group of migrants arriving in Europe (last year, 196,170 applied for asylum). Taliban attacks are on the rise.

If the EU really were to offer a “migration-sensitive” aid deal, the chances are that President Ghana (and CEO Abdullah) will agree. They will say they’re prepared to take back the 80,000 deportees. There’s a lot of aid at stake. The donors gathered in Brussels – up to 70 countries and 20 international organizations and agencies – are expected to match the $4bn per year pledged at the 2012 Tokyo conference till 2016.

The Brussels Conference on Afghanistan will be attended by the great and the good of Europe, European Council President Donald Tusk, High Representative Federica Mogherini and European Commissioner for Development Cooperation Neven Mimica. It rather grandly promises to consider “a new Afghan national development framework” and “Afghan reform efforts, including on economic reform, rule of law, improved public finance management and anti-corruption so as to ensure the provision of the most important services and public goods.”

We were saying that when I was in Afghanistan in 2011.