How long will Hillary Clinton be free to hike in the woods in Trump’s America?

On Friday, The Guardian reported a touching story about Hillary Clinton unplugged. The defeated candidate after the election.

The Guardian wrote that Margot Gerster, “an upstate New York woman, hoping to take her mind off of the US election results with a hike through the woods of Westchester County, bumped into another woman with a presumably similar notion: Hillary Clinton.”

What followed was hugs and pleasantries, a photo opp for Ms Gerster (and her child) and the revelation that Mrs Clinton’s stunning and self-confessedly “painful” election defeat has effectively returned her to the things to which all of us turn when wounded by events: to the trees, the natural order of things, the joy of fresh air and exercise, alongside your husband and the dogs.

The first thing I thought when I saw Ms Gerster’s photo with Mrs Clinton (taken by Bill Clinton, no less) , was that the defeated Democratic candidate for president should enjoy her freedom for the time she has it.

She may not have it long.

President-elect Donald Trump, a vengeful man with a penchant for petty feuds, will take his oath as America’s 45th president on January 20. On his first day in office, a clutch of the big ideas he expressed on the campaign trail could probably be easily realized. He could scrap what he deems “illegal” executive orders issued by his predecessor Barack Obama. He could repeal parts of the Affordable Care Act, often dubbed Obamacare. He could do away with Mr Obama’s order that some illegal immigrants be shielded from deportation. And he could appoint a special prosecutor to investigate Mrs Clinton.

Will he do the last?

It would be hugely unwise.

First, Mrs Clinton won the popular vote (but lost the electoral college) in the November 8 election. She had the support of just under 60 million American voters (roughly 2 million more than Mr Trump). By persecuting Mrs Clinton, Mr Trump would turn off a vast swathe of Americans and fail to broaden his appeal at the start of his unusual, controversial presidency.

Second, a Trump presidential order to go after his recent political rival – for matters that have already been investigated and cleared by the FBI – would send a signal. That America, a proudly rule-bound vibrant democracy, is no different from banana republics where clapping your opponent in jail is the reflexive move of every authoritarian who takes office.

Would President Trump do it?

Should he do it?

“It could have a major, devastating impact on her and would create a very bad precedent like we see in Third World countries” where election winners often imprison their rivals, Professor Banzhaf added.

So will he do it?

Sadly, despondently, it is hard to see Mr Trump not falling to the lowest point he is able.

A plan to investigate Mrs Clinton with a view to locking her up would accomplish two things in a Trump-led America:

** it would keep Trump-supporters riled up and ready to go

** and it would distract people’s attention from mis-steps, mistakes in governance and the wild promises that President Trump simply cannot keep

BBC Radio 4’s Alan Dein appears to have found much the same when interviewing Facebook friends across America for his programme ‘Don’t log off’. He spoke to them about the election of Mr Trump. Here’s what emerged. Trump-supporters focussed their anger on Hillary Clinton. They saw her as the lode of America’s betrayal. They wanted vengeance for much that has changed in the US and stringing up Mrs Clinton would provide catharsis.

The only chance that Mrs Clinton will remain free – to hike in Westchester County or do whatever she wants to do with the rest of her life – is that Mr Trump see reason.

Or that outgoing President Obama pardon her for unspecified charges that have never been brought against her. There is precedent. Gerald Ford did so for Richard Nixon.

Mr Obama can prevent President Trump from turning America into exactly the banana republic it lectures about rule of law. And he can keep Mrs Clinton free to wander where she pleases. The first is more important than the second. But the second, surely, is an article of faith too. 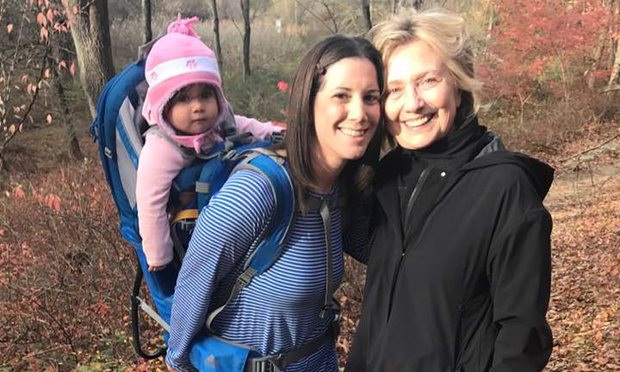