When Bob Dylan said ‘pre-existing’ commitments, he was using a 16th cent word 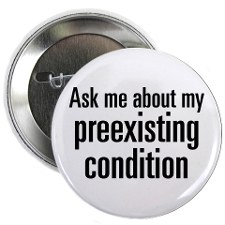 When Bob Dylan said “pre-existing commitments” will prevent him from picking up his Nobel Prize in person in Stockholm, he used at least one word too many. The “pre” in “pre-existing”. It’s not required.

“Pre-existing” is a tautology in two halves of one word. “Existing” means to exist already. So does “pre-existing”. But the word has become newly fashionable especially in news stories in the last few years. I think it happened because of the insurance industry’s focus on “pre-existing” conditions. Insurers don’t like to cover people who have them but President Obama’s Affordable Healthcare Act insists that “pre-existing” conditions should not be used to deny coverage.

According to Merriam-Webster dictionary, the first known use of the word “pre-existing” was in 1585.

Surely that’s no reason for it to continue?