“I have seen you before,” said Khalifa suddenly, looking into our faces as we prepared to walk out into the Medina in Kairouan, the seventh century city founded by the Arabs in central Tunisia.

We stared at him, all leathery creased skin, long stained teeth and sharp yellowing eyes. “I was in a burnoos,” he said, “up on the roof where you can see the Aghlabid Basins. Didn’t you say you had come last year? I saw you. I remember.”

Suddenly, I remembered. He had been the wily and persuasive middleman up on the roof as we surveyed the Basins. He tried to delight us with exoticism – his and of the cactus soap in the little shop below, which he assured us had the best prices. He pressed tea and little sweetmeats upon us and we had bravely walked away from the chance of winning his respect by opening our wallets. I wrote about that 2015 visit to Kairouan, and on that blog the photo of the Aghlabid Basin is taken from the very roof where Khalifa eyed us as potential prey.

A year later, he became our guide to parts of the old city that we wanted to learn about. He is, by his account, the only one of 75 guides still willing and able to ply his trade. “The younger ones can’t afford it, there’s not enough work. I’m 75, I can still do it,” he said.

Khalifa’s story intertwines with a modern strand of his city, Kairouan. Tunisians boast that this is fourth holiest city of Islam – after Mecca, Medina and Jerusalem – but where, in the Muslim world do you hear that claim echoed?

Kairouan, with its formidable Grand Mosque (built within a half-century of the Prophet’s death), carpets and Makhroud, the signature date pastries, wants to be a tourist attraction. And it should. It has history, memories, monuments and a certain sense of joie de vivre. But this is not a city that’s advertised as a destination for tourists – from the Muslim world or beyond. La Kasbah, the city’s best hotel, is a beautiful and vast echoing space, with hardly any guests. The city is busy – with the business of life – but shopkeepers are resigned to making do with small transactions – the daily exchange with thrifty residents, rather than the grand bargains struck with awestruck visitors.

And yet there is so much to see here. Look at this wall. It’s part of the solid protection thrown up around the Medina in the seventh century. Note the thinness of the Kairouan brick and its colour – it’s called Sahara. Three-and-a-half km of wall still exist and 15,000 people live within the mediaeval walled city. The original wall was destroyed – along with most of Kairouan in 1057 (by a Shiite leader), then rebuilt some 600 years later. 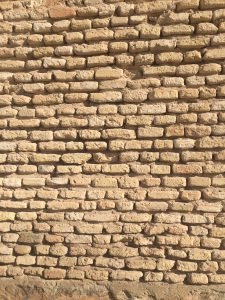 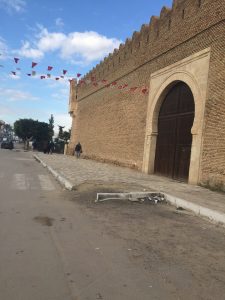 The Medina offers wondrous – and impractical? – wares. These elaborately dressed bottles should really only be used to store rose water. Or placed in a glass-fronted display case. 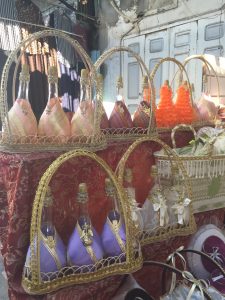 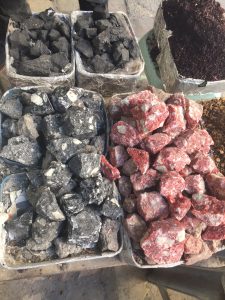 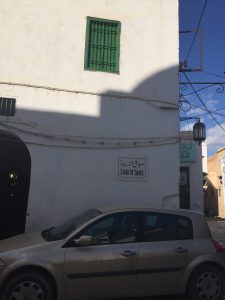 A shop that specialises in Brik, a Tunisian version of the Turkish borek. It’s basically a sheet of  thin pastry around a filling with a whole egg broken into it, the whole pocket then deep fried. 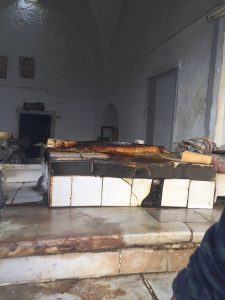 At the other end of the street is Restaurant Barrouta, intensely busy this New Year’s day, mainly we’re told because it’s the only place open. Lined up before it, the clientele is an energetic – and hungry – flow, seemingly yearning for the restaurant’s signature (possibly only) offering, Kafteji. This is a Tunisian favourite, a  mixture of tomatos, peppers, eggs and often zucchini and potatoes too. Restaurant Barrouta serves it inside a pillowy round of bread, and I saw the patrons decant the extra into dirty plates that were yet to be cleared away. Then, they ate off them.

By the way, the restaurant’s name – Barrouta – simply indicates the hold a certain legend has on this city. Bir Barrouta is one of the oldest wells of in Kairouan and popular belief has it, that it is linked to the sacred well in Mecca. 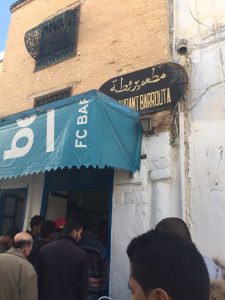 This is the home of Al Aouani, a family that counts a cousin of the Prophet as one of its ancestors. It is in the Achrafs neighbourhood of the Medina. The Aouanis established a madrassa, they have a mausoleum, they hosted Tunisia’s late dictator Habib Bourghiba and Britain’s Queen Elizabeth when she visited. They remember the Queen as “Mallika Juliana”.
The Aouanis are that big a deal. But you wouldn’t know as you pass the street door, inset into a wall, that meets the other side by way of a brick arch they call a “sabat” out here, a corruption of the French word for slipper. To outward seeming, the Aouani home is inconsequential. Walk in and its scale, wealth and age are a revelation. 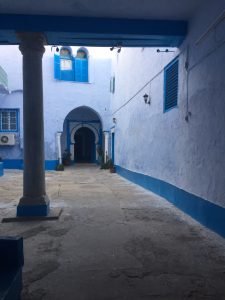 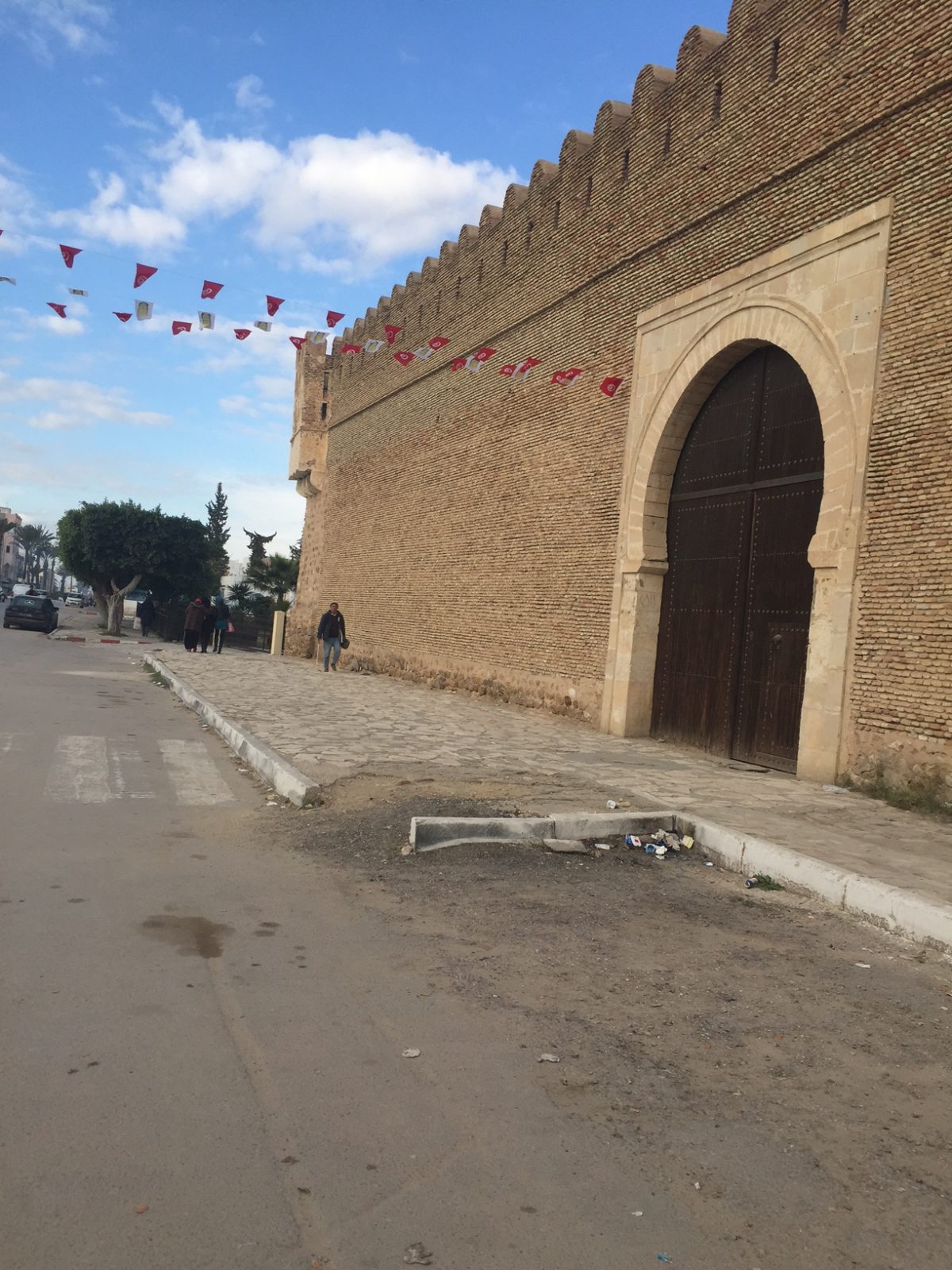