The Obama administration’s last-minute stand with the Palestinians 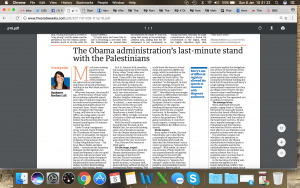 Much scorn is being poured on the Obama adminis­tration’s belated scramble to defend Palestin­ian rights and its principled indictment of Israeli settlement building in the West Bank and East Jerusalem.

What was the point, the scornful ask, of US Secretary of State John Kerry making a splendid speech more than 70 minutes long when he would soon be powerless to do anything meaningful about the situation? Soon, Israel’s cham­pion, President-elect Donald Trump, will blow in to the Oval Office, all orange make-up and bluster, and with big plans to bolster Israel’s position above and beyond anything any US adminis­tration has done.

Under Trump’s designated envoy to Israel, David Friedman, the US embassy will move from Tel Aviv to Jerusalem. On January 3rd, the first day of the new US Congress, three senators from Trump’s Republican Party — Ted Cruz, Marco Rubio and Dean Heller — introduced the Jerusalem Embassy and Recognition Act. Israeli settlements in the occupied territories will sprout faster and more furiously under the approv­ing eye of a US ambassador who has personally raised millions of dollars for West Bank building activity. “Stay strong, Israel,” Trump tweeted, “January 20 is fast approaching.”

So it is. January 20th, presiden­tial inauguration day in the United States, when Trump takes over from Barack Obama, is close at hand. Closer still is the January 15th Middle East peace conference in Paris, during which 70 coun­tries are likely to endorse the parameters outlined by Kerry for an Israeli-Palestinian agreement and a two-state solution.

Israel is apoplectic. Its Defence Minister Avigdor Lieberman described the Paris conference as “a tribunal… a new version of the Dreyfus trial but the accused won’t be one Jew; it’ll be the whole state of Israel.” (Alfred Dreyfus was a Jewish French artillery officer wrongly convicted of treason in 1894 and sentenced to life in prison.)

With the world’s attention only intermittently focused on the Middle East, are you still thinking what a lot of people are saying: That the Obama administration’s last-minute attempt to look as if it cared about the Palestinians is posturing of the very worst sort?

If so, here are five reasons to think again:

From December 23rd, when the Obama administration allowed the passage of the first UN Security Council resolution critical of Israeli settlements in nearly 40 years, to January 15th, Israel will have suffered 23 days of international finger-wagging. This is embarrassing, enervating and exposes Israeli Prime Minister Binyamin Netanyahu’s claim that he had all but neutralised interna­tional concerns about continued settlement building.

The Security Council resolution could boost the boycott, divest­ment and sanctions (BDS) cam­paign, which is modelled on the economic pushback against apartheid in South Africa. The text of the resolution calls on members “to distinguish, in their relevant dealings, between the territory of the State of Israel and the territories occupied since 1967”. This effectively encourages countries to differentiate between Israel and the settlements, possibly along the lines of the European Union’s 14-month-old guidelines on the separate labelling of imports from Israel proper and from the occupied territories. In November, France became the first country to enforce the guidelines. If BDS gains momentum, it could hurt Israeli exports, costing its econ­omy $15 billion-$47 billion over a decade.

Kerry spoke of nakba, the term Palestinians use to describe the catastrophe of expulsion from their homeland after 1948. He described the Palestinians’ status under occupation as “separate but unequal”. With nakba, an Ameri­can secretary of State explicitly and unprecedentedly recognised and relayed to the world the reality of Palestinian suffering. The reference to “separate but unequal” spoke to the American people’s understanding of racial segregation. Kerry’s use of different registers allowed his speech to resonate with disparate audiences, making it more effective with more people in more places.

Kerry’s December 28th speech and the December 23rd UN resolution applied the sledgeham­mer of facts to the fortress of lies constructed by Netanyahu over the last few years. The Israeli prime minister has worked hard to normalise settlement building but both the UN resolution and Kerry’s tough talking reiterated the international consensus that they are illegal. Even if late in the day, there is value in reaffirming the international consensus, in speaking up for the oppressed and in calling out injustice.

The message is key:

Kerry addressed the Israeli people, urging them to “decide (between) the unusually heated attacks that Israeli officials have directed towards this (the Obama) administration” and the reality of the Israeli state’s actions. He also sent a hopeful message to the Palestinians and their leaders, who have had little to show for their efforts to use diplomacy and peaceful activism over the years.

It is pointless to argue over whether to be optimistic or pessimistic about the Obama administration’s belated push to say the unsayable and do the unthinkable about Israel at the United Nations. An optimist sees reality as better than it is; a pessimist sees it as worse than it really is. Best to be a realist.

In the last days of a fading year, realism was applied to the Israeli-Palestinian conflict. One might have hoped for more, much before, but realistically, this is as good as it gets. For now.