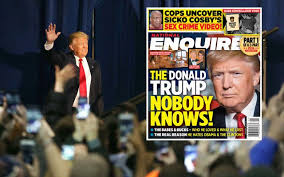 When Buzzfeed published documents about Russia’s closeness to Donald Trump, it stressed that these were “unverified and potentially unverifiable”.

Mr Trump predictably erupted in his usual way, criticising “fake news”, a “political witch hunt” and so on.

Instead, Mr Trump might like to consider becoming a real Christian rather than the “fake” believer he was for the duration of the election campaign.

“Therefore all things whatsoever ye would that men should do to you, do ye even so to them: for this is the law and the prophets.”

It shows Mr Trump in July, talking about his base slander of Republican rival Ted Cruz’s father. He said he didn’t know the Mr Cruz Senior and was simply conveying what was being said (in the sensationalist gutter press, by the way).

How Christian was that? More importantly, how responsible was that? How ethical was that?