Trump-ism & philosophy. Lessons from the 10th cent & its insistence on thinking for oneself 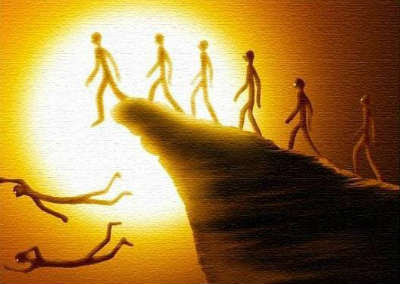 This blog is NOT about President Donald Trump and philosophy (even though his aides had assured us ahead of his inaugural address that it would be a “philosophical” meditation!)

Here, we’re going to explore what, if anything, philosophy can teach us about Mr Trump’s election victory and his January 20 inauguration as Americas’ 45th president.

We can reach back into the past and learn a great deal from philosophy.

Especially if we pay heed to Professor Peter Adamson’s @histphilosophy musings. For those who do not know him, Professor Adamson (one of my intellectual heroes) is professor of Ancient and Medieval Philosophy (and has special expertise in Arabic philosophy). He holds a joint appointment with King’s College, London and the Ludwig Maximilian University of Munich.

Professor Adamson’s podcast on the lessons from ancient philosophers to understand Mr Trump’s win and the #Brexit vote is worth a listen.

But if you don’t, here are some of the more important takeaways:

** What, many might ask, is the value of democracy when it throws up results that could endanger stability? This, as Professor Adamson points out, is not just with the Trump win and Brexit vote. The election victories of Islamist parties also prompted the question: is democracy the right way of making political decisions?

** Like any sound philosopher, Professor Adamson turns the issue on its head. The right question is not whether or not democracy is a good system to determine governments, but the following one: under which conditions is democracy most likely to produce good results, and avoid bad ones?

** In this context, it’s worth harking back to Plato’s critique of democracy in the Republic. He believed that the ideal state would be ruled by philosophers, ie people with a grasp of the truth and the greater good. Democracy per se, according to Plato, which is to say rule by the demos or the people (the man and woman on the street) was always going to be inferior to that by philosopher-kings.

** And yet, Plato saw great value in expert knowledge, something incidentally that Brexit campaigner Michael Gove disdained as unnecessary for the British people ahead of the referendum on the EU. Expert opinion has also been rejected by many of Mr Trump’s fervent supporters. Experts are increasingly conflated with the elite and dismissed as mendacious manipulators, thereby making it difficult for people to make informed democratic choices.

** And yet, as Professor Adamson reminds us, there is a passage in the Republic in which Plata pays tribute to expert knowledge. He has a “parable about a boat where all the passengers want to have a turn acting as captain. All the while, a skilled navigator is on the boat, but he is spurned and ignored by the rest of the people onboard.”

** What this means is that the people – in order to exercise democracy with good sense – must consult expert knowledge especially for complex questions. Climate change and Brexit, for instance, are complex issues. These are not matters of opinion but of fact. There is, Professor Adamson says, “an objective answer to the question how dangerous climate change is, and whether it is caused by humans.” The same goes for what will happen to the British economy if it pulls out of the EU.

** So here is where ancient philosophy offers a way forward. As Professor Adamson says, in the Islamic world back in the 10th century, the ulema or scholars and clerics were categorically not supposed to engage in taqlid, which means the “uncritical acceptance of authority.” The ulema were charged with thinking deeply and critically for themselves. Some theologians in the Islamic world also believed that all Muslims – ulema or not – should think about what they believe (the existence of God for instance) and why.

** How do we do this? Especially for complex issues? Especially when there’s such a blitz of data and contradictory statistics? Professor Adamson suggests that democracies need citizens to train themselves to be good judges of expertise. We don’t have to each get a PhD in climate science to vote on climate change but we can establish which expert has the most rational view on the issue. And we could – and should – worry about politicians who insist that “everything is simple; that experts can safely be dismissed as a mere pressure group; that gut feeling is the first and last word on the important political issues of the day.” As we know, the world is a whole lot more complex than that.

Or, as Professor Adamson says, “We should be humble enough to open our eyes, trusting that if we do, we are capable of seeing.”