Will Britain sell out the Palestinians again? 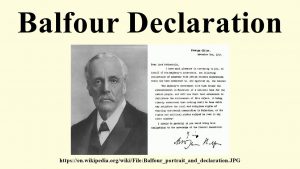 One hundred years after a British Foreign minister sneakily, strate­gically and fatefully announced the British empire’s support for the establishment of a Jewish national home in Palestine, the United Kingdom may be surreptitiously selling out the Palestinians all over again.

This time, it is not the Balfour declaration, the November 1917 letter from British Foreign secretary Arthur Balfour to a leading British Jew, Baron Lionel Walter Rothschild. That missive is available for all the world to see at the British Library in London. “His Majesty’s government,” Balfour wrote, “view with favour the establishment in Palestine of a national home for the Jewish people and will use their best endeavours to facilitate the achievement of this object.”

In 2017, the British stance on the Israeli-Palestinian issue is much less easy to document and archive. Through a subtle series of diplomatic manoeuvres, Britain has tried to indicate a sideways shuffle on the conflict. Britain refused to participate wholeheartedly in a Middle East peace conference staged January 15th by France in Paris, becoming the only major EU country to attend at the relatively low level of observer.

Britain also refused to sign the ensuing communiqué on how the European Union could support the Israeli-Palestinian peace process.

The logic was obvious. In fact, it could be reckoned up in filthy lucre, in the pounds and pence that post-Brexit Britain hopes to earn from Donald Trump’s America. Remember that the Balfour declaration was made in exchange for debt relief from the Rothschilds and other bankers to help pay for the first world war.

Now, Britain is anxious to curry favour with the new US president to get a trade deal that it hopes can offset losses caused by withdrawal from the European single market. If it has to shunt off Palestinian hopes for self-determination in the process, well, that is legitimate collateral damage.

In an interview with the Times of London, Trump urged Britain to veto further UN Security Council’s resolutions on Israel. Trump’s plea, just days before his inauguration as president, came within one month of Security Council Resolution 2334, which condemned illegal Israeli settlements as a threat to a two-state solution.

Britain, one of the five permanent members on the Security Council, had pushed for Resolution 2334 and voted for it but, after Trump’s entreaty, it appeared to moderate its outrage at Israeli behaviour.

Right after the December 23rd Security Council resolution, which was slammed by an irate Trump, Britain began a soft-focus attempt to recalibrate its position in line with the new US president’s stated inclinations. British Prime Minister Theresa May allowed her spokesman to issue a blunt statement condemning former secretary of State John Kerry’s criticism of Israel and its right-wing government’s policy of settlements building.

With a month left in office for Barack Obama’s administration, the minor tectonic plates of geopolitical alliance-building were shifting with respect to the Palestinians. Yet again, they were to serve as bargaining chips in a soulless attempt for Britain to do deals with an incoming American president who describes himself as a great negotiator.

Will it work for Britain? Will selling out the Palestinians result in rich dividends for a country desperate to find foreign trading partners and investors in its post- Brexit avatar?

Do not bet on it. There is lingering uncertainty over Britain’s real position on the Israeli-Palestinian issue. On January 17th, May declared with full-throated enthusiasm that Britain was “committed to a two-state solution in the Middle East”. Her reaffirmation of a decades-old policy was not a spontaneous reassurance. It came in response to a journalist’s pointed question and she offered no detail of how, when or even if Britain would help bring the Israelis and Palestinians back to the negotiating table.

And yet Britain continues to provide substantial aid to the Palestinian Authority — almost $450 million from 2011-16. All shades of its political spectrum — from the governing Conservatives, to main opposition Labour, the third-party Liberal Democrats, right-wing populist UK Independence Party and bit-player Greens — support a two-state solution.

Some might see the British strategic readjustment to Trump-friendly, pro-Israeli moves as a throwback to the mendacious faux sympathy of times past. Seventy years ago, Baron Martin Charteris, head of British Military Intelligence in Palestine in 1945- 46, acknowledged the “romantic element” of the Zionist idea even as he declared that “the Arabs, too, are a romantic people”.

That betwixt-and-between position has come back into focus today. It does Britain no credit.