Hey, Indian-Americans & other US Desis, Trump’s Bannon is coming for you next 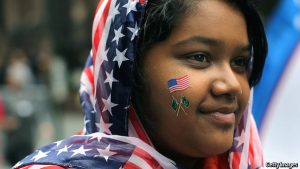 Even if you’re not Muslim, you should be seriously worried about how to live in Trumpistan.

To to be anything other than white and Christian means it may become increasingly hard to live and work and be successful in Trump’s America.

I’ve written about Mr Bannon’s views on Indian techies in Silicon Valley before, but here it is again. (It refers to a radio show that mentions Indian techies. Click here to listen to the show for yourself. The relevant exchange is around the 17-minute mark.)

Herewith what I previously wrote:

“Last November, Mr Trump appeared on Mr Bannon’s radio show, which went out on the “Patriot” channel on SiriusXM. They discussed Indians in Silicon Valley and the role of immigrants in America. This was how their discussion went (transcript from Slate) after Mr Trump said he was concerned that foreign students attending Ivy League schools have to return home because of US immigration laws.

“We have to be careful of that, Steve. You know, we have to keep our talented people in this country,” Trump said. He paused. Bannon said, “Um.”

“When two-thirds or three-quarters of the CEOs in Silicon Valley are from South Asia or from Asia, I think . . . ” Bannon said, not finishing the sentence. “A country is more than an economy. We’re a civic society.”

“I still want people to come in,” Trump said. “But I want them to go through the process.”

Bannon said: “You got to remember, we’re Breitbart. We’re the know-nothing vulgarians. So we’ve always got to be to the right of you on this.”

Mr Bannon was wrong in his claim that South Asians make up two-thirds of Silicon Valley CEOs.

But as Andrew Prokop recently noted on Vox, “the bigger takeaway is that Bannon was disturbed enough by this mistaken idea to bring it up. He was evidently trying to choose his words carefully, but he made it crystal clear that he was disturbed by the (fictional) idea of all these Asian-born CEOs running around in America.”

Mr Prokop goes on to point out that “some of the people around Trump, like Bannon, top White House policy aide Stephen Miller, and attorney general nominee Jeff Sessions, go much further. They want to privilege native-born Americans over even the most entrepreneurial and industrious (and legal) immigrants.”

The ban on citizens from seven Muslim countries – and initially, their 500,000 green card-holders – could affect more than 13 million green-card holders from the rest of the world, too, as Harvard law professor Noah Feldman recently wrote. “To hold a green card was once to feel safe leaving the US, secure in the knowledge you’ll be able to get back in. No longer,” he said.