Is there a Trump in the house to speak up for Muslims? 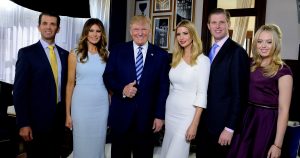 America’s Jews have their protector, one Ivanka Trump, the US president’s older daughter and a convert to Judaism for love of Jared Kushner. She has called for “religious tolerance” in response to a wave of attacks on Jewish symbols and threats against the community’s centres. Soon enough, Ivanka’s father, Donald — the president of the United States — was speaking out against anti-Semitism, too.

This naturally brings us to the rising insecurity faced by Muslims in America.

Is there a Trump in the house to speak up for them?

It seems to have an effect. Donald Trump’s characteristically casual condemnation of attacks on American Jews — “horrible”, he called them — came after an 8-day span of refusing to publicly con­demn such behaviour, but after Ivanka tweeted on the subject, her father got in on the act.

In a sense, Ivanka has served as an unpaid political lobbyist on behalf of America’s Jews at a particularly low point for the com­munity. In one single weekend, more than 170 Jewish graves were desecrated in St. Louis, Missouri, and bomb threats were made against Jewish community centres across the country.

A Trump lobbyist is greatly needed for American Muslims, too. Anti-Muslim attacks are on the rise across the United States. Islamophobic commentary is increasingly being heard without the fig leaf of fair-mindedness and sans explanation or even euphe­mism.

In a sense, such anti-Muslim rhetoric is issuing right from the top of the ship of state with Trump’s dangerously single-mind­ed Deputy Assistant Sebastian Gorka boldly tracing the problem of “radical Islam” directly to the Quran and “religious ideology”.

Anecdotally, there are many more instances of casual aggres­siveness towards people who ap­pear to be Muslim than a year ago. Certainly, Muslims in the United States — whether citizens or merely legally present in the coun­try — say they are more fearful of the future. They have seen, as has much of the world, that instances of Muslim suffering elicit no reac­tion from Trump.

Ever loud-mouthed and unbut­toned, especially on Twitter, Trump remains conspicuously silent when terrorists target Mus­lims. Note the US president’s shameful absence of sympathy for the 73 dead (and their families) when an ISIS-linked suicide bomber targeted a famous Sufi shrine in southern Pakistan. Note his deliberate callousness about Muslim lives lost when he failed to acknowledge deadly bombings in Baghdad three days in a row, the last of which killed at least 45 people.

The only time that the Trump White House has responded to an attack on a mosque was when the Quebec incident was incorrectly said to have been perpetrated by a Moroccan Muslim.

Unsurprisingly, the White House press secretary let alone the president are unwilling to issue a condemnation of Islamophobia along the lines of the one against anti-Semitism.

So here is a plan, or at least the beginnings of one.

Charming young American Muslim men should actively seek out Tiffany, Donald Trump’s younger daughter, with a view to influencing her ideas if not the rest of her life. The president is known to prefer Ivanka to every other female person on the planet and to privilege his older daughter over and above all his children but he still sets great store by blood and family ties. If Tiffany were to start tweeting about the need to apply religious tolerance to Mus­lims in America, it is likely that her father — the president — will pay attention.

Even if some dashing young Muslim did not win Tiffany’s hand in marriage (in the manner of me­diaeval contests to be consort to the daughters of kings), her find­ing out more about Islam might be a great help. It is worth noting that in constitutionally secular countries such as India, which has the third largest Muslim popula­tion after Indonesia and Pakistan, the term “love jihad” is often fear­fully applied to inter-faith unions between Muslim men and Hindu women. This, because they are considered to sneakily increase the Muslim tribe.

In the case of Tiffany Trump, a love jihad, at least of ideas, is important.

Many Americans may be re­sistant to the idea of Tiffany con­verting to Islam, though Ivanka converted to Judaism some years before her father’s presidential gig. It would be enormously important if the president’s daughter were available to speak up for a whole community’s unfair victimisation. That would surely count in a White House that seems only to be guided by family and friends rather than rule of law or the principles of natural justice.

Swayed by the admiration of a forceful and knowledgeable Mus­lim man (can we agree that Ivanka came to her concern for Jewish people because she met and mar­ried Jared, an orthodox Jew?), Tiffany would passionately preach religious tolerance and remind Americans that theirs is a nation founded on laws and the principle of religious liberty.

There may be no better way than a love jihad. And, by the way, this is only half a spoof.