Syria operation was a giant sandwich board for Russia. Here’s why 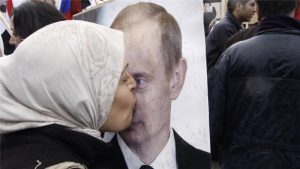 Do you too get the sense that the Russians consider Syria to be a giant sandwich board for them?

That they see the September 2015 intervention and continued engagement as an advert for multiple attributes that the Russians insist they have. Such as:

On February 23, formerly known as Soviet Army and Navy Day and now Defender of the Fatherland Day, the minister made known that Russia “tested 162 types of contemporary and modernized weapons in Syria, which showed a high level of effectiveness.” Only 10 weapons systems he said, performed below expectations.

There are two points to make about this.

First, the Kremlin has never hidden its delight that the Syrian adventure gave it the chance to show off new military hardware. It has positively swaggered since September 2015, firing cruise missiles at Syrian targets 900 miles away, sending long-range Bear and Backfire bombers on round-trip missions from bases in Russia and dispatching Admiral Kuznetsov, Russia’s only aircraft carrier, to the Syrian coast.

Second, the Kremlin has seemed positively ecstatic about the prospect of a real-time real-lab test of its weapons – all the better, it hopes, to hawk them around.

Say what you will, there would be something ethically challenged about going to war to showcase one’s wares.

Russia hasn’t exactly. As Aleksandr Golts, a fellow at the Kennan Institute in Washington, told NPR, its two main goals were not about money per se. They were “to force the West to talk with Russia and break the isolation from the Ukrainian crisis, and secondly, to support Syrian President Bashar Assad.”

But even he admits that trying out new arms was a bonus.

That is not an edifying thought, let alone admission.