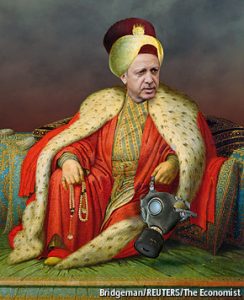 Orhan Pamuk, Nobel literature laureate and one of the greatest contempo­rary chroniclers of Istanbul, once asked if the city’s takeover by the Muslim Ottomans represented conquest or decline. Opinions on the historical events of 1453 are divided, Pamuk mused, by whether you’re standing in the east or the west of the city. In western Istanbul, the Ottoman victory is seen as the fall of Constantinople. For easterners, it is always the conquest of Istanbul.

Something similar, if on a larger national stage, may be said of Tur­key after President Recep Tayyip Erdogan’s narrow win in the April 16 referendum. The proposed constitutional changes will swell the president’s powers to almost grotesque proportions.

Is it a conquest over Turkey’s coup-prone army or a manifesta­tion of the country’s democratic decline?

Was the referendum’s 51.4% “yes” result a test of wills between rural and urban Turkey? Three of its largest cities — Istanbul, Ankara and Izmir — voted against Erdogan’s proposed changes but the conservative heartland was in favour.

Was it a struggle between simple pious folks and sophisticated secu­lar ones?

Was it a contest between a dying old order and a new one struggling to be born?

The oft-expressed fear is that Erdogan’s constitutional changes will allow him to style himself as a neo-Ottoman sultan, brooking no dissent or questioning and seeking to rule by diktat and fiat, the secu­lar fatwa of elected autocrats.

The unstated fear is that the secular fatwa will become the template for a region in which democratisation is either patchy or ignored outright. Roiled by uprisings that were once collec­tively and hopefully dubbed the “Arab spring,” governments in the Middle East and North Africa have been treading softly for the past five years, without much enthusi­asm for more inclusive politics or visionary reform. Could Erdogan’s Turkey serve as a role model?

Once upon a time, Erdogan seemed to think it could. He pre­sented Turkey as the ideal model for the region because it offered a unique blend of Western-style democracy and Islam. He declared as much in September 2012 at his Justice and Development Party’s annual conference in Ankara. Er­dogan told the party and a hundred foreign guests, including Egypt’s then president, Muhammad Morsi, that Turkey had “become a role model for Muslim countries.”

Erdogan appears to have learnt some of the right lessons from Morsi’s downfall. First, that it is important to curb the powers of the military, especially in Turkey, which has had four successful coups since 1960, one coup con­spiracy and last year’s failed at­tempt. To the extent that Erdogan’s constitutional changes make a military coup less likely, they actu­ally strengthen democracy.

However, by allowing Turkey’s powerful new executive presidency to reign supreme instead, Erdogan may have created Version 2.0 of the Turkish model he once praised. This recommends having elections to consolidate power as well as to undermine institutional checks and balances.

Erdogan, of course, cannot pat­ent this idea. It is old (remember Hugo Chavez in Venezuela?) and it is well-worn (Vladimir Putin has been using it to devastating effect in Russia) but it is an interesting innovation for the region because it blends the process of democracy — elections, a genuine contest — with the undermining of democratic norms, such as checks and balanc­es, a free press and healthy political debate.

This phenomenon has a long name — authoritarianisation — but it has a brutally short agenda.

It aims to project the glowing fa­çade of democracy while prevent­ing examination of its hollowed-out interior.

It is a seductive idea. The tragedy would be if Recep the Resolute, Turkey’s new sultan, manages not only to dismantle democracy at home but to hawk this bill of goods around the region.