Is Mrs Merkel really silly enough to hint she only invited Ivanka as a strategic route to dad?

If German chancellor Angela Merkel invited Ivanka Trump to Berlin’s women’s summit as a strategic act of diplomacy, it’s rather careless of her to let her thinking become widely known.

I’m not sure how smart it is to let everyone – including your target – know that you’re being emollient and flattering only for insanely smart and strategic reasons. It seems to be rather counter-intuitive.

According to this Politico piece, Mrs Merkel behaved like a “sly fox” in zooming in on Ivanka as a reliable “back-channel to President Donald Trump.”

The piece quotes James Jeffrey, a senior fellow at The Washington Institute, who says Mrs Merkel worked out a way to approach an atypical US leader by making overtures to his favourite daughter. “Merkel is sly as a fox,”Mr Jeffrey said, “the unorthodox road to this guy is Ivanka. That’s the person you go to, not the second secretary in the Embassy in Berlin.”

Fair enough. And that might well just be idle gossip and speculation rather than a secret German strategy to woo President Trump.

For, wouldn’t it backfire if you told everyone about it?

And I’m not sure, if I were Ivanka, that I’d be thrilled to read Mrs Merkel wasn’t dazzled by my womanly strength and steely but soft leadership qualities. And that all she wanted was to use Ivanka as a “channel”, a path to President Trump.

So what’s the story? Did Mrs Merkel really cultivate Ivanka in order to curry favour with the Trump family and ultimately with the US president? Or did she invite Ivanka to Berlin because she saw her as a remarkable role model and one worth putting forward? 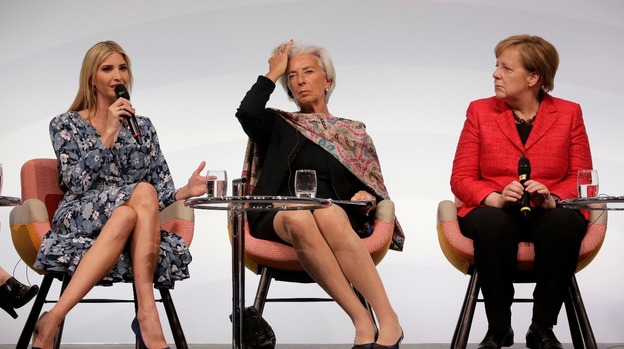