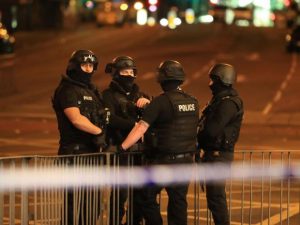 Is there a link between a country’s foreign policy and the terrorist threat it faces? The United States hardly ever asks itself that search­ing question, probably for fear of the answers. The issue does come up in Britain occasion­ally before it is speedily fumi­gated from the national con­sciousness.

This time though, the fateful connection between foreign policy and terrorism hangs heavier and more malodorous over Britain.

The link was made just days after the May 22 suicide attack in Manchester and in the mid­dle of the British general election campaign. It was Jeremy Corbyn, leader of Britain’s main opposition Labour Party and long-time op­ponent of most Western military interventions of modern times, who suggested the attack required a reappraisal of the failing “war on terror.”

Neither Britain nor the West is safer after waging multiple wars and toppling regimes after 9/11, Corbyn pointed out. Nor did it make strategic sense to intervene, topple regimes and leave “large areas without any effective gov­ernment,” he added. Libya today, Corbyn said, was in such chaos that it could “become a breeding ground for enormous danger for all of us.”

Corbyn, an old-fashioned leftie spoke from the heart but even he did not spell out the whole truth. Six years after Britain and other Western countries used the principle of muscular human in­tervention to meddle in Libya, the country is not a potential source of terrorism; it is breeding it.

Libya — leaderless, rudderless, wracked by a nearly 3-year-old civ­il war — represents a twin threat to Europe. It continues to be a con­duit across the Mediterranean for thousands of illegal immigrants from Africa and elsewhere. Jihadis find space in Libya’s lawless lands to cultivate a particularly virulent, self-propagating species of the anti-Western crusader.

Such fighters — not just in Libya but in Iraq, Syria, Egypt, Afghani­stan, Pakistan, the Philippines and elsewhere — are driven by contempt for the West’s claim to the moral high ground. They point to the unjust wars, the hundreds of thousands killed, the self-serv­ing weapons sales to autocratic regimes and the drone strikes that result in “collateral damage.”

It is, of course, complicated. There was Western interference in Iraq and Libya but no regime toppling in Syria. The West is criti­cised for both.

The September 2001 attack on the United States preceded the Af­ghan and Iraq wars but their exe­cution has added to the perception of Western cynical callousness. For some young Muslims in the West, their governments’ policies towards co-religionists prompt disillusionment and alienation.

This may have been a key driver for Manchester suicide bomber Salman Abedi, at least according to his sister. She has said Abedi “saw children — Muslim children — dying everywhere and wanted revenge. He saw the explosives America drops on children in Syria and he wanted revenge.”

There we have it once again. The connection between Western foreign policy and terrorism. Not as justification — nothing can ex­cuse terrorism — but as part of the explanation for acts of terror.

Corbyn was careful to insist that discerning the link between Britain’s wars and the escalating security threat does not absolve terrorists, who must “forever be reviled and held to account for their actions.” His political oppo­nents still sought to paint him as unpatriotic, almost a closet jihad­ist for calling out the emperor’s lack of clothes, which is to say the West’s refusal to acknowledge its self-righteous and wrong-headed policies towards the Muslim world.

In the 16 years since 9/11, most Western politicians have stuck to the script and refused to admit any connection between ghastly acts of terrorist violence and grievances about Western wars. This, despite British intelligence agencies consistent pronounce­ments on the impact of British participation in Middle Eastern wars.

Just before the Iraq invasion in 2003, for instance, Britain’s Joint Intelligence Committee warned “the threat from al-Qaeda will in­crease at the onset of any military action… They will target coalition forces and other Western interests in the Middle East. Attacks against Western interests elsewhere are also likely, especially in the United States and United Kingdom, for maximum impact. The worldwide threat from other Islamist groups and individuals will increase significantly.”

Yet few politicians dare to question the Iraq war, which was controversial at the time it began, calamitous at its height and a catastrophe that would continue long after it officially ended.

The closest that Tony Blair, who led Britain into that war, ever came to admitting any link with terrorism was in his May 2007 resignation speech. He said that removing Saddam Hussein in Iraq and the Taliban in Afghani­stan had resulted in “blowback from global terrorism and those elements that support it.” The blowback, he admitted, had been “fierce and unrelenting and costly.”

It was an apology for an apol­ogy. Manchester shows that the “blowback” continues.