What is it about Muslims in the West that Trump finds so discomfiting? 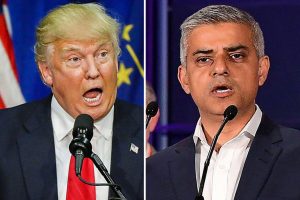 If you are a man named Khan, Donald Trump probably has it in for you. How else to read the US president’s savage verbal assault on London Mayor Sadiq Khan within hours of an audacious terrorist attack on the British capital?

It is hard to imagine any other occupant of the White House be­having with such bad taste and in­sensitivity as to upbraid London’s highest elected official at a time of great distress. Trump, however, had no compunction about tweet-punching Khan within hours of the heinous attacks on the city.

Whatever happened to the Anglo-American special relation­ship, one might wonder? Where did empathy and sympathy go? How about some old-fashioned courtesy?

Good questions but they do not really apply to Trump, who is like no other American president. He is a brawler who acts on his own pe­culiar bias. From his track record, the bias appears to be against the Khans who cross his path. For “Khan” read Muslims who live and flourish in the West and who dare to call Trump out on Islamophobic words and deeds.

Consider this: Eleven months ago, candidate Trump shamelessly assailed another Khan, Khizr, father of a Muslim US Army officer who died serving his country in Iraq. The bereaved father, an American-Pakistani, criticised Trump’s “smears” on Muslims in a powerful speech at the Democratic Party convention.

As is customary, Khizr Khan was listened to with great respect. As the surviving family members of an American who died in war, Khizr and his wife Ghazala were treated with gentle awe by much of the United States. Not so Donald Trump. He belittled them, darkly insinuating that they belonged to a backward strain of Islam that op­pressed women. He even trivial­ised the Khans’ loss of their son by comparing that ultimate sacrifice to his own, which he described as working hard to create “thousands of jobs.”

Such tastelessness is hardly unusual in Trump’s interactions with people named Khan. Go a bit further back in time and Trump is found to be engaged in a war of words with Sadiq Khan, the newly elected mayor of London. Khan re­fused Trump’s sultan-like offer to exempt London’s mayor from his proposed “complete shutdown” on Muslim entry to the United States. The mayor said with high-minded disapproval: “I don’t want to be the exception to be allowed to go to America. It’s not about me. It’s about my friends, family and oth­ers from all around the world.”

Later, he described Trump as “ignorant” about Islam, a com­ment that appeared to goad the narcissistic, famously thin-skinned former TV reality star into paroxysms of rage.

Trump and his family continued to attack Sadiq Khan. In March, soon after the Westminster Bridge attack, Trump’s eldest son falsely accused the London mayor of being lax about terrorism. This month, the US president himself implied that the mayor was indif­ferent to terrorist atrocities, pos­sibly because of his faith.

Trump’s personal antipathy to Khizr and Ghazala Khan in the United States and Sadiq Khan in the United Kingdom is not the only issue. His dislike for those who criticise him is the thread that runs through all of Trump’s public feuds but there is something darker that lies deep below the roiled waters of every argument between Trump and a Muslim in the West.

Trump seems nonplussed by Western Muslims who are believ­ers and well-integrated, are of some consequence and are over here, which is to say Europe of the United States. This suggests an orientalism so old-fashioned as to be best summed up by Rudyard Ki­pling’s 1889 poem “The Ballad of East and West,” which starts with the assertion that “East is East and West is West and never the twain shall meet.”

What is it about Muslims in the West that Trump finds so discom­fiting? Does he resent their right to question him as equals, to correct, to look him in the eye and to reject the base stereotyping of a whole faith community?

Both Khizr Khan and Sadiq Khan trained as lawyers and are able to see and call out Trump’s contempt for the law and the prin­ciples of natural justice.

So do many other people, to Trump’s chagrin, but he just seems to get a great deal angrier if their name is Khan.