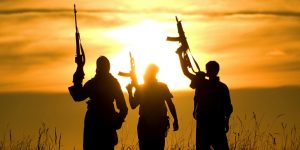 If we allow them to do so, anarchists can intimidate just as much as violent extremists. Both types of disrupters were probably on the minds of those who attended or organised the G20 summit in Germany.

The tyranny of the disrupter is worth remembering as the oft-rechristened, US-launched “war on terror” drags into its 17th year. There is no sign it is being wound down. There is no attempt to redesign or rethink the grammatically (and mili­tarily) waging of war on an abstract noun.

If anything, the current US president is indulging in ever more hair-raising claims about the danger posed by terrorism. In Warsaw, ahead of the G20 summit, Donald Trump warned that Western civi­lisation itself faced an existential threat.

Such words were not meant to hearten. They may have contributed to the panic evinced by the German authorities as protesters massed in Hamburg for a “Welcome to Hell” march. The Hamburg police chief warned of “massive assaults.” The German Defence Ministry report­edly expressed worry that anar­chists might “disrupt the summit’s procedure, occupy all access routes and logistics hubs, attack urban infrastructure and blockade the harbour.”

These are the sort of warnings the world has come to associate with terrorist violence. That they are used for acts of civil disobedi­ence indicates the extent to which dissent itself is increasingly deemed dangerous. The terrorist, as they say, is someone who has a bomb but not an air force. Anarchists may have neither but politicians still portray them as a threat disproportionate to the mathematical risk they pose.

Time then to restate the facts.

More people die from a lack of clean water than from wars. Even for Americans, who became in­tensely fearful of terrorism after 9/11 and spend tens of billions every year on homeland security, the chances of being killed in a terrorist attack are very low — 1-in-20 million. There is more chance — 1-in-18 million — of an American being killed by a dog. It’s a whole lot more likely he or she will win the lottery, be struck by lightning, drown in a bathtub or die in a building fire.

Then there is the lethal danger posed by traffic accidents to people everywhere but especially in the MENA region and in most low-income countries. In 2013, the World Bank highlighted MENA’s soaring road traffic mortality rate. At 22 deaths per 100,000 people, it was more than four times that of coun­tries with better road safety.

All of this is a rather long-winded way of saying it’s time to apply per­spective and the art and science of probability to the issue of terrorism. The hysteria has gone on too long, triggered by the collective breast-beating after every successful or foiled jihadist plot on Western soil.

It’s true that the number of at­tempted attacks rose after ISIS called on its followers to attack Western countries militarily in­volved in Iraq and Syria but only a very few were successful.

The West has suffered much less from terrorism than MENA but you wouldn’t know that from the cater­wauling. Estimates from 2015 stated that 3% of all deaths by terrorism occurred in Western countries since the turn of the millennium. Three-quarters of the global total of deaths due to terrorist attacks took place in five countries — Iraq, Afghanistan, Pakistan, Nigeria and Syria.

These figures are available to the American public. They’re from the US State Department’s 2015 “Coun­try Reports on Terrorism,” the most recently available in the annual series. And yet the erroneous im­pression is nurtured that Americans and Westerners face an existential threat.

If they do, it is because fear-mon­gering politicians such as Trump seek to dangerously subvert the West’s hard-won civil rights and rule of law in the name of security.