Donald Trump has changed the way we speak and that is, to coin a presidential phrase, sad 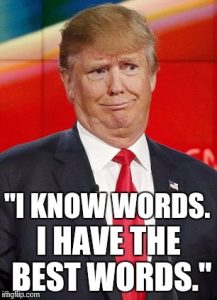 It is a sign of the times that a potential columnist pitches an idea to an editor as follows: “…this is to coin a presidential phrase, sad.”

Yup, folks. Donald Trump has changed the way we speak and write. Both personally and professionally. And linguistic purists don’t like it just as much as those who resent the devaluing of norms in public life.

Think of all the Trumpisms that have proliferated like weeds in the lowlands and highlands of public discourse. They are irrepressible, resistant to the scythe of precision and clarity. They mean nothing and say even less. All they show is the jumbled shelves of the junk shop that is this American president’s mind.

Some Trumpisms that have passed into ordinary discourse are as follows. One can only hope they will expelled at some point, as the bye-product of a hard-to-digest, overly fibrous linguistic diet of falsehoods, exaggeration and feverish conspiracy theory.

President Trump’s former campaign manager, Corey Lewandowski, is on record to say he is “the Hemingway of Twitter”.

It’s another matter that no one has ever noticed Mr Lewandowski’s particular facility with the language of Shakespeare. Even allowing for the fact that he is being overly admiring of his powerful former boss (Mr Lewandowski is a Washington lobbyist now and has a firm to run and a family to raise) let’s consider Hemingway for a moment. A writer who won the Nobel Prize for Literature. A writer who is considered an enormous influence on fiction of the last century. A writer whose works are regarded as classics. And a writer who famously (and rather humbly) once said “I write one page of masterpiece to ninety-one pages of shit. I try to put the shit in the wastebasket.”

Can you imagine Donald Trump thinking anything he says or tweets is “shit”?

He’s no Hemingway, but we knew that already. 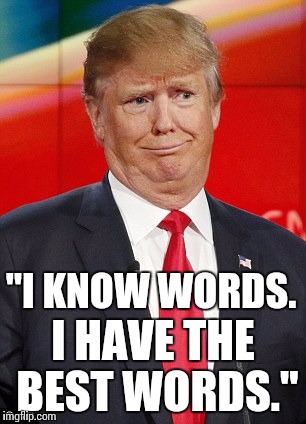