Why the Dome of the Rock belongs to us all 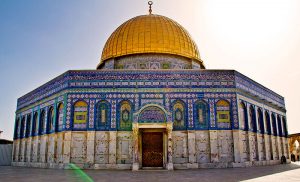 After a tense couple of weeks, the centrist Jerusalem Post wearily turned to understatement to describe the com­plex known to Jews as Temple Mount and to Muslims as Haram al-Sharif. It is, the Post declared, “the most sensitive piece of real estate on the planet.”

It is certainly one of, if not the most contentious. More often than not, the focus is on the mosque, which has existed as a house of prayer, albeit originally a small one, from shortly after Prophet Mohammad’s death. For some Palestinians and Muslims, there is a deep and abiding fear that Israel will reclaim the complex one day as the site of the Temple of Solomon and Herod. Jewish tradition states that it is at Temple Mount that a third and final temple will be built.

The complex, however, is important for reasons other than the tangled conflict between two religions over land, legitimate claim and lawful possession. The complex contains the very first monument of the Muslim faith, one that changed the very nature of art, perception and architecture for the whole world.

The Dome of the Rock, which was built within 90 years of the divine revelations being delivered to Prophet Mohammad by the archangel Gabriel, literally and figuratively created a new grammar of aesthetics. It started a new style, a visual culture that was different from Christian decorative expression in its elevation of writing to one of the highest forms of art.

And it laid the foundation for the unique character — aniconism, austerity and symmetry — of Islamic art and architecture. Overall, experts say, this helped define a philosophy of the new faith and to the development of perspective art, which used the geometry of light.

The Dome of the Rock was, along with a change in coinage, the first concrete sign that a significant transition had occurred in the Nile-to-Oxus region. It was not just the changeover from Byzantine rulers to Muslim ones. It was that of mindset, the sense that a whole new way of seeing had been found.

Consider this: The Dome of the Rock was completed in 691 by Caliph Abd al-Malik ibn Marwan of Islam’s first ruling dynasty, the Umayyads. Before the turn of the eighth century, he became the first Muslim caliph to replace the traditional ruler’s portrait on gold and silver coins with Arabic inscriptions invoking the name of God. The word of God had become a decorative tool and the coins inscribed with “ruler of the orthodox” and “representative of Allah” stressed the piety and humility of Muslim rulers compared to those of pre-Islamic empires.

But it was in the Dome, an ambitious project meant to symbolically appropriate the territory taken by Islam, that the new artistic language had really been formulated. Script ran 240 metres around the inner arcade. Human figures were not to be seen in the mosaic. The writing included early datable Quranic quotations, the profession of faith and an exhortation for People of the Book to tell the truth about God.

Experts, not least Hans Belting, professor of art history at the Academy for Design in Karlsruhe, Germany, say this was enormously significant. “The monumental textual inscription in the Dome’s magnificent interior… proclaims an agenda: The absence of representational images has become a programme,” he said.

Until then, the adornment of Islam’s religious spaces had largely adhered to Mediterranean tradition, with a profusion of images. As the first shrine of the world’s youngest faith, the Dome’s use of script as decoration would affect the way Muslims dealt with spaces that had religious significance.

Aniconism, however, was not a licence for iconoclasm and certainly not the barbaric paroxysms of violence displayed in recent years by the Taliban, the Islamic State (ISIS) and other perverted practitioners. The late Richard Ettinghausen and Oleg Grabar, both acclaimed Islamic art historians, have stressed this point. “It is incorrect,” they say of the dome’s decoration “to talk of a Muslim iconoclasm (even if destruction of images did occur later) but one should call the Muslim attitude aniconic.”

This would have a revolutionary effect on perspective and the use of light in art and architecture around the world. In some ways then, the Dome of the Rock may be even more unique than al-Aqsa Mosque. It is the heritage of all of humanity, not just Muslims.