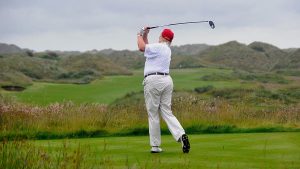 There’s only one thing to say when an American president equates anti-racism activists with neo-Nazis and white supremacists: It’s Don­ald Trump.

In the end, with the Trump presidency as with any other, it’s all about statements and silences. Both speak volumes. Remember Trump’s election campaign, full of bigotry, racism and Islamophobia? Remember his outrageous call for a “complete shutdown” on Muslim entry to the United States? Remember Trump’s mean (and meaningless) feud with Khizr Khan, father of a Muslim US Army officer who died serving his country in Iraq? Remember his attack on London Mayor Sadiq Khan?

More recently, please note Trump’s studied silence since the August 5 bomb attack on Dar Al-Farooq Islamic Centre in Minnesota. Note, too, his inability to denounce as terrorism the August 12 incident in Virginia when a white American man drove a car into a crowd just like jihadists in disparate European cities.

Trump’s explicit statements matter only because they fill the gaps until his ominous silences. They underline the extent to which an American president can thoroughly abdicate moral leadership.

So, it was shocking but not surprising Trump defended the white supremacists who incited bloody demonstrations in Virginia. It didn’t change anything that he unambiguously equated the neo-Nazis’ actions with those of the “very, very violent alt-left”? The narrative is already set. There is no longer much doubt about the reality of Trump — on show or off it. America’s elected leader appears to be a racist Islamophobe and, yes, there is reason to be afraid.

As US commander-in-chief, Trump has nuclear weapons, an array of bombs, a huge army and the mighty dollar at his disposal. He also has the massive mega­phone that goes with the job. That may be the greater danger.

Trumpism is proving to be a bit like America’s traditional cultural and commercial exports. Just as Hollywood movies, VJs, rap music, Coca-Cola, Levi’s jeans, baseball caps worn backward and Facebook affected world culture, so is Trumpism today. It is corrod­ing the conventions by which we eschew racial slurs and jokes that mock people for their culture, religion, skin colour and sexual orientation. Racism, bigotry and Islamophobia are becoming mainstream and the Trump White House is leading the charge.

Consider recent events. Trump failed to denounce as a “terrorist” James Alex Fields Jr, a 20-year-old reported Nazi sympathiser from Ohio who was charged with ploughing a car into a crowd of anti-racism protesters in Char­lottesville, Virginia, killing a woman named Heather Heyer.

Jihadists have frequently used vehicles as a terrorist tool and it’s noteworthy that candidate Trump had more to say about the 2016 Bastille Day truck attack in Nice, France, than he did as president about Charlottesville 2017. “This has to be dealt with very harshly,” he said of Nice and the Tunisian perpetrator 13 months ago. He was unsure if Fields was a “murderer or terrorist.”

Soon after, in Poland, activists bearing white roses and photos of Heyer strove mightily to prevent newly visible and energised far-right activists from marching in Warsaw. In Britain, unnamed police intelligence sources told a media outlet they were investigat­ing several dozen neo-Nazis plots to attack Muslims. Coincidentally (or not), a column in Britain’s biggest-selling newspaper, The Sun, asked “What will we do about The Muslim Problem?”

Eighty years ago, when National Socialism rose to prominence in Germany, it was the Jews who were the problem. Now, it is Muslims, too. The ideology that serves as an umbrella for several different schools of exclusivist thought, including ultra-national­ism, racism and xenophobia is back but with two crucial differ­ences. To anti-Semitism has been added Islamophobia and the president of the United States will be no impediment as this gro­tesque movement marches forward in its steel toecap shoes, fists clenched.

In all fairness, the United States and parts of the Western world had been heading down this path before Trump’s rise to promi­nence. Remember the rampant suspicion stoked by American Islamophobes towards President Barack Obama because his middle name was “Hussein”?

Then there were the anti-sharia law campaigns in several US states starting in 2010. They were pointless because sharia was never likely to be a force in the US legal system but ignorance fed fear, which stoked a burning hatred of Muslims. In Britain, sections of the media and far-right politicians have been promoting revulsion towards Muslims and migrants for the better part of two decades.

Trumpism has taken it all further. By espousing a moral equivalence between those who manifest hate and those who oppose it, Trumpism has caused American leadership of the world of ideas to mutate into a mon­strous thing.