Nail polish in The (Islamic) State? It got my attention in Peter Kosminsky’s TV drama

Golden Globe and BAFTA Award-winning director Peter Kosminsky’s much-heralded four-part British television drama series on radicalised Britons entering ISIS/ ISIL/ Islamic State had many gripping moments, but it was the nail polish that stayed with me.

An older woman – western or Lebanese? I wasn’t sure which – sported blood red nail polish in the first part of ‘The State’, screened on Channel 4 on Sunday (August 23). The woman served as mentor to female ISIS recruits newly arrived in Syria from the West. She was carefully garbed in regulation head-to-toe black and had the spiel down pat. And she had those red nails.

Anyone who knows anything about modern Islam – and the controversies about piety and permissible fashion and behaviour that regularly erupt therein – might wonder how and why that woman wore nail polish. Let me explain. Even though the Quran is silent about nail polish (!) as are   early (by which I mean the first few hundred years of Islam) pronouncements on how to prepare for prayer, there is a belief among some sections of the Muslim community that it’s simply not acceptable to pray wearing nail polish. This, because the polish creates a waterproof barrier that prevents the proper completion of the pre-prayer ritual of wudu (washing).

Accordingly, orthodox Muslim women (in South Asia, the Middle East, Africa and elsewhere) prefer to stain their nails with henna rather than wear nail polish.

Which brings me back to the female mentor with fashionable nails in Mr Kosminsky’s drama on ISIL. Would she really have worn nail polish?

To me, it initially seemed an oversight. (Akin perhaps to the watch allegedly worn by Ben Hur’s opponent, something that’s highly improbable in ancient Rome.)

But then I wondered if it was meant to represent the faith-friendly innovations that have come up with respect to nail polish. A wudu-friendly one came on the market four years ago. Perhaps the ISIL mentor was wearing that? 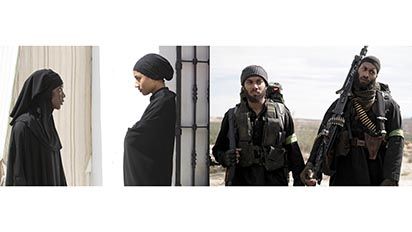