Is Trump’s travel ban 3.0 not about Muslims anymore? 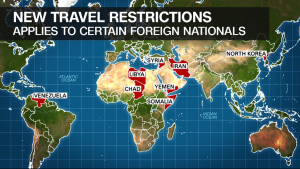 Technically, it’s no longer possible to call US President Donald Trump’s new list of travel-restricted countries a “Muslim ban.” North Korea and Venezuela, two of the eight names on Trump’s week-old proclamation, are non-Muslim. Muslim-majority Sudan has been dropped from the list. Iraqi nationals are no longer banned outright from entering the United States but still subject to special vetting.

As for the rest of the 57-mem­ber Organisation of Islamic Cooperation, they were not affected by January’s travel ban 1.0 or by 2.0 issued in March. Therefore, their absence on travel ban version 3.0 doesn’t say anything new about the targeting of countries with large Muslim populations. It remains hard to prove a negative.

Should we stop calling the Trump administration’s travel restrictions a “Muslim ban”? Yes, but with a crucial difference. This is a “Muslim and others” ban. It seeks to limit, in the colourful idiom Trump has previously used, Muslims and other “bad hombres.” Thus, version 3.0 lumps the nationals of several mainly Muslim countries with “bad hombres” from North Korea and Venezuela, both of which Trump excoriates. It is still a ban on Muslims, just dressed up to look like it isn’t.

No one should be fooled.

This leaves us with the six predominantly Muslim countries on travel ban 3.0. Nationals of Iran, Libya, Syria, Yemen, Somalia and Chad face perma­nent restrictions on entry as of October 18, though Iranian students and Somali visitors will still make the cut.

Legally, Trump’s new order will probably soar more easily than earlier versions over the hard bar set by the American constitu­tional principle of non-discrimi­nation. As Harvard constitutional law Professor Noah Feldman recently noted, the US Supreme Court might find it doctrinally and politically easier to take the traditional view that defers to the Trump administration’s national security assessment.

This is mainly because version 3.0 claims to target countries with poor “information sharing and identity management” in the interests of American homeland security. It’s hardly surprising that conflict-ridden Syria, Libya, Yemen and Somalia don’t have an organised data-collection system to feed into US visa queries and Iran can hardly be said to be friendly or cooperative with the United States. But Chad, which is admittedly poor, is a reliable US military ally in the fight against extremist group Boko Haram. How does it help US security to take a hard line on Chad’s view of terrorist threats?

Logic dictates that poor information collection is a problem that goes beyond the six Muslim countries affected by travel ban 3.0.

Evidence shows that visitors or even immigrants from the targeted countries have been a harmless presence in the United States, neither launching terror­ist attacks nor facilitating them.

Memory throws up choice passages from candidate Trump’s promise of a “complete and total shutdown on Muslim entry to the United States.”

Dispassionate assessment suggests that Trump is not on course to achieving a “total shutdown on Muslim entry” but his newest travel restrictions accomplish much the same thing as previous ones. They send a signal that Muslims (and a few others) are unwelcome in the United States and distrusted because of who they are.

Ban 3.0 may not be found unconstitutional but it is still bigoted and wrong.