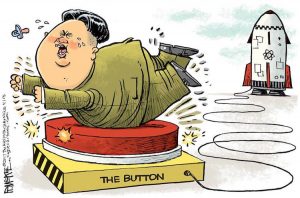 It’s not gone away. Nothing has changed with the Hermit Kingdom, where by the way, it is “Juche Year 106”. (North Korea counts time from the birth of their original Great Leader, Kim Il-­sung.)

Anyway, even though US President Trump has not tweeted of late about “little Rocket Man”, as he insultingly calls Kim Jong Un, North Korea remains in its state of heightened preparedness for war (as Nicholas Kristof reported in The New Tork Times). Its nuclear programme remains where it was – or further forward. Earlier this week, CIA director Mike Pompeo offered the assessment that North Korea was just months away from perfecting its nuclear weapons capabilities and could strike the United States within months.

So, let’s explore other (saner) voices than from the Trump administration.

The best way to avoid war is to reward “bad behaviour”. He says “we should not pretend that there are no precedents for doing so. This is how the Korean Peninsula Energy Development Organization came about. The agreement on KEDO would not have been reached in 1995 if Pyongyang had behaved with sweet reason in 1993 and 1994. The same is true of the Joint Comprehensive Plan of Action with Iran.”

He goes on to emphasise that “North Korean ambitions are limited — it only wants to survive. Who knows the limits to Tehran’s ambitions? The US has been willing, against the objections of some of its closest Middle Eastern friends and allies, to tolerate Iran as a threshold nuclear state with no guarantee that it will not, in a relatively short time, cross the threshold when the JCPOA expires. By comparison, a peace treaty with a de facto nuclear-armed state is a small price for stability in the most economically dynamic part of the world. After all, everything else has failed.”

That sounds just about right.