Arabs were in Europe a thousand years ago 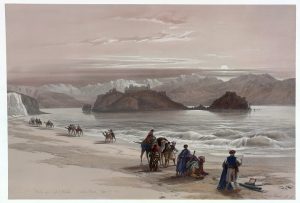 Those concerned about a settled Muslim presence in Europe might want to note that it goes back at least 1,000 years. Recent research by a Swedish university claimed that “Allah” in Arabic was embroi­dered onto Viking funeral clothes, though doubts about the textile’s dating have been expressed by an American academic.

Whatever the truth about the Viking garments, the relationship between the Muslim world and the Vikings has already figured in popular Western culture. Forty-one years ago, American writer Michael Crichton’s early novel “Eaters of the Dead” drew upon the exploits of tenth-century Arab traveller Ahmad ibn Fadlan. He was dispatched to Europe’s northern climes by the Abbasid Caliph Muqtadir. Crichton’s novel was republished as “The 13th Warrior” to correspond with the film adaptation, which starred Antonio Banderas and Omar Sharif.

Crichton would go on to become a bestselling author, creating the fascinating fantasy world of “Jurassic Park” but his novel on ibn Fadlan is not a great read. This has little to do with ibn Fadlan’s account, which is unusual and riveting. It reveals the easy commerce and human connectedness between Europe and the Arabs of the tenth century.

Consider the circumstances in which ibn Fadlan was sent by the caliph to the land of the Volga Bulgars, now part of the Russian republics of Tatarstan and Chuvashia. The ruler of the Bulgars, Almis ibn (Shilki) Yiltawar, had recently converted to Islam. He sent an envoy to Caliph Muqtadir asking for help in informing his people and himself about the new faith. He also sought help to build a mosque.

Almis’s admiration for the Abbasids was manifest in the imitation dirhams he coined in great quantities, which men­tioned Caliph Muqtadir by name.

Ibn Fadlan did his best to help Almis’s spiritual journey. As he recounts in his travelogue, he suggested the right tone of humil­ity for the khutba, the public sermon. “… none but He, the All-high and the All-powerful, should be called king,” ibn Fadlan chided the new convert. He subsequently helped Almis adopt a Muslim name. Unsurprisingly, in light of Almis’s admiration for Muqtadir, the Bulgar ruler picked Jafar, the caliph’s first name.

Ibn Fadlan also advised Almis on the conventions for the muezzin’s call to prayer and inheritance laws, among other things. He recounts his failure to get the women to wear veils.

While in the Bulgar encamp­ment, ibn Fadlan met the Rus, Viking traders, whose unclean, uninhibited ways he described with remarkable objectivity. The meeting between Viking traders and an emissary of the Abbasid caliph was hardly as unexpected as many would think. By 921, when ibn Fadlan’s party set out from Baghdad, Vikings had been in contact with the Muslim world for more than 100 years. This was at least partly through trade.

The Abbasids, the world’s second Muslim dynasty, had created a network of maritime and land routes that linked Europe to China. The impressive connectivity allowed the Abbasid Caliph Harun al-Rashid to send Charlemagne a unique present in 800 to mark his coronation as Holy Roman emperor. It was an Indian elephant, which was shipped to Pisa from a port in North Africa.

There are several accounts by Arab geographers and historians of the Muslim world’s contact with Europe. One of the more notable is by Al-Masudi, who was more or less a contemporary of ibn Fadlan and is sometimes described as the Arab Herodotus. Having travelled far and wide, Al-Masudi reported on the Frankish people’s capital “Bar­iza” or Paris, the fierce battles between the Andalus Muslims and Galicians in what is now north-western Spain and “the coming of Islam” to Rhodes and Crete.

All of this is a rather long way of saying that the Muslim world of the tenth century was not in active hostility to other parts. Islam was not considered a threat but perhaps a curiosity, a revolu­tionary model for society.

Consequently, it should not be surprising that Uppsala Univer­sity textile archaeologist Annika Larsson claims to have found ninth- and tenth-century Viking funeral garments with “Allah” and “Ali” spelt out in silk and silver thread. Larsson said they are in Kufic Arabic script and that some of the buried may have been Muslim. She has been challenged on her assumptions by Stephennie Mulder, associate professor of Islamic Art and Architecture at the University of Texas.

Even so, there is no doubt about the interconnectedness of our world then and now.