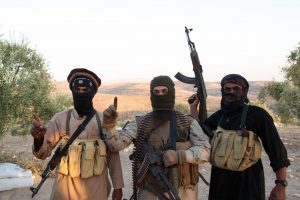 A British government minister recently addressed the unique international difficulties posed by the Islamic State’s loss of territory and the shrinking of the country it audaciously named after itself. In that harsh line, he laid bare the complexities of the case. With the Islamic State’s defeat, the foreign fighters who pledged their troth to the brutal extremist group would want to return home. What should their home countries do with them? What could they do about them and for them?

The answer, British minister Rory Stewart said, is to wish fervently for their death. It is better, he said of the estimated 400 Britons with the Islamic State (ISIS), “to be serious about the fact these people are a serious danger to us and, unfortunately, the only way of dealing with them will be, in almost every case, to kill them.”

The uncompromising stance may have seemed surprising from Stewart. A former diplomat who served in Iraq, Stewart is an intrepid and empathetic travel writer. He has walked through Pakistan, Iran, Afghanistan and Libya and run a charitable crafts association in Afghanistan. He is one of the few in Western public life to acknowledge that the 2003 Iraq invasion had been an almighty mistake. If anyone might see the grey in a seemingly black-and-white situation, Stewart would be the one.

And yet Stewart isn’t much of an outlier among Western officials. Just days earlier, French Defence Minister Florence Parly spelt out her hopes for the fighters, more of whom joined ISIS from France than any other Western European country. “If the jihadis perish in this fight, I would say that’s for the best,” she said.

The American opinion was summed up by Brett McGurk, special presidential envoy for the global anti-ISIS coalition. “Our mission is to make sure that any foreign fighter who is here, who joined ISIS from a foreign country and came into Syria, they will die here in Syria,” he said.

The terms of the debate are blunt. The West doesn’t want extremist nationals back. It would rather they conveniently perish on the battlefield than have to deal with repatriation. The anti-ISIS coalition has given names and photos of Western fighters to the Kurds. One People’s Protection Units (YPG) official was quoted as saying they would be “eliminated.” Even so, there is the chance some foreign jihadists will escape. There is the possibility they will be forcibly returned to the coalition, after which, repatriation is the only option.

Though the West has been the most voluble, governments in the Middle East and North Africa and in Muslim countries in South-east Asia face the same challenges. A report by the Soufan Group and the Global Strategy Network said the contours of the problem are troublingly vague but clear nonetheless. At least 5,600 ISIS fighters from 33 countries have gone home. That includes 900 Turks, 800 Tunisians and some 760 Saudis. Approximately 20–30% of the European jihadists have returned, though it’s 50% of those from Britain, Denmark and Sweden.

The report, titled “Beyond the Caliphate: Foreign Fighters and the Threat of Returnees,” said Libya and the Philippines are particularly vulnerable to the reverse flow from ISIS’s failed cali­phate. With their own returning citizens come other fighters, seeking refuge in or revenge out of Muslim countries.

Obviously, it would be for the best, “the preferred resolution,” in the words of Bruce Hoffman, director of Georgetown Univer­sity’s Security Studies Pro­gramme, if they didn’t return. “What worries me,” Hoffman added, “is I think it’s wishful thinking that they’re all going to be killed off.”

Clearly, there is an urgent need to prepare for the likelihood of the fighters’ return. This must be by rule of law. In Europe, where the death penalty has been abolished, they would have to be tried (possibly for treason as well as criminal activity) and in some cases, the obviously brainwashed and repentant would need to be rehabilitated.

The Soufan report acknowl­edged the defects in each approach. Incarceration risks further radicalisation or the radicalisation of fellow inmates, it said. Also, rehabilitation and reintegration is hard, especially when many fighters “were never integrated in the first place.”

The solution is not as obvious as the scale of the problem but this much is evident: It’s not enough to wish ISIS fighters dead.