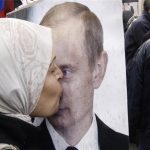 What is Russia up to in the Middle East?

On the one hand it seemed to support the Kurdish independence referendum. But equally, it wants to maintain the status quo.

It’s playing off both sides just as the Soviet Union did.

Remember how the Soviet Union balanced support for “national liberation movements” such as the PLO with support for “bourgeois nationalist regimes” such as Saddam Hussein in Iraq?

An interesting point about the Middle East’s relationship with Russia comes from a piece by Omar Ashour, Senior Lecturer in Security Studies at the University of Exeter. Dr Ashour says that in the Middle Eastern region’s “six-decade-long history of state-directed chemical mass murder, one power has consistently protected the perpetrators: Russia.”

He points out that in the 1960s, the Soviet Union stifled condemnations of Nasser’s attacks on the Yemenis, leading then-United Nations Secretary-General U Thant to declare that he was powerless to deal with the matter.

Fast forward to the present day and Russia remains involved in more ways than one. Dr Ashour writes that Moscow is not just “silencing debate in the UN Security Council or promoting diplomatic and legal impunity. President Vladimir Putin’s regime may have contributed to the latest chemical attack, by secretly reneging on the 2013 ‘framework for elimination of Syrian chemical weapons’, which called for the elimination of Syria’s stockpiles by mid-2014. It may even have been directly complicit in the attack.” That’s an acutely damaging allegation. If true, it makes one wonder why Donald Trump’s administration warned the Russians of the impending attack.

But more to the point, it offers an interesting perspective on the dreadful glue that joins the Middle East and Russia in a relationship of fear-inducing dependence.