The ugly twinning of terrorist threat and Trump’s response 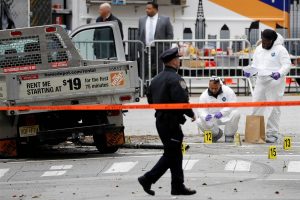 The terrorist threat to the United States and US President Donald Trump’s response to it are twinning — in terms of farce and danger. This became clear after the October 31 truck at­tack in New York, the city’s deadli­est since 9/11.

The alleged perpetrator, identi­fied as Sayfullo Saipov, who legally immigrated to the United States from Uzbekistan seven years ago, emerged from his rented truck brandishing imitation guns. Trump responded to the attack, which left eight people dead, by seeking more extreme vetting of foreigners entering the United States and by decrying “political correctness.”

Saipov moved to the United States as a law-abiding citizen of Uzbekistan. More extreme vetting would have neither stopped his entry, nor prevented the Hallow­een attack on New York. Trump’s multiple iterations of a travel ban on citizens of mainly Muslim countries would also have been ineffective. First, because Uzbeki­stan was not on Trump’s banned list. Second, because Saipov has been in the United States for the better part of a decade.

Consider the facts of the case Trump is using to push the policy agenda he first articulated on the campaign trail as a “total and complete shutdown of Muslims entering the United States.”

Saipov entered the United States under a diversity immigrant visa programme and Uzbeks who knew him since he moved to the country said he initially wanted to live the American dream.

The diversity programme hands out up to 50,000 immigrant visas a year and applicants must pass thorough checks, including biographical information, a birth certificate, a medical exam, an arrival/departure record, back­ground scrutiny and an in-person interview with a US consular of­ficial in their home country.

Trump has shown indecent anxi­ety about linking jihadist terror­ist attacks to the threat posed by immigrants, especially those of the Muslim faith. There is no reason to believe that Trump’s nostrums will cure the United States’ security migraines. If anything, they will leave the country more vulnerable to the charge of unfair treatment of Muslims.

Until now, this narrative had focused on US foreign policy blun­ders in the Muslim world, not least the 2003 Iraq invasion, the abuse meted out to Iraqis by American soldiers at Abu Ghraib prison, the excesses of the Guantanamo Bay incarceration facility and ramped-up drone strikes.

Now, Trump’s vicious attacks on immigrants may bring America’s public relations problem home. The cohesion that has marked community relations in the United States is profoundly threatened. Daniel Byman, security studies professor at Washington’s George­town University, said Trump’s re­sponse to the atrocity in New York is illogical. Rather than “reaching out” to America’s overwhelmingly peaceful and cooperative Muslim community, Trump’s approach will “push back” against them, he said.

There is darker, more dangerous subtext to the official US response to the New York attack. It betrays utter blindness, an unseeing perspective on what might trigger such an incident. In the hours after a truck was used in New York in the deadly fashion of jihad­ists in France, Britain, Germany, Sweden and Spain, there was no public searching for answers from Trump, members of his adminis­tration, his Republican Party or from the wider US foreign policy establishment.

There was no introspection, no call to understand why a young Uzbek granted an immigrant visa to the United States in 2010 should have turned on the country he wanted to make his home. No one has said anything about any role that US foreign policy may have played in stoking anger among Muslims and others around the world.

This is wilful blindness and blind foolishness.

Presumably, Saipov satisfied US authorities that he posed no threat in 2010. That his view of the United States changed so much between 2010 and 2017 should be a key point of interest for those who seek to promote US security.

Someone should be asking why and insisting on an honest answer.