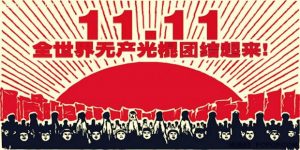 Today, November 11, is Singles’ Day in China, the biggest shopping day of the year. Can you see a time when it becomes watched (and possibly imitated) around the world just like Black Friday and Cyber Monday from the US?

Yes, because imitation is the sincerest form of flattery and the usual applause line for anything that makes money or a political career. So Black Friday is a good formula to get people to open their wallets whether in New York or London. And Trumpism is a good way to appeal to people’s worst instincts and unexamined anger about any and everything, whether in Wisconsin or Warsaw.

Like Black Friday and Trumpism, Singles Day has so far notched up a record of success. Alibaba, for instance, is anticipating a good Singles Day. The company will capture 35 per cent of China’s digital ad spending this year so its mood bears watching. It is bullish. This Singles Day Alibaba may surpass last year’s sales of nearly $18bn. More than 140,000 brands, and hundreds of millions of consumers, will participate.

Looking ahead, it is not inconceivable that the Chinese version of Black Friday will, in the span of a decade, become a fixture on the world’s commercial calendar.

But what if the Chinese don’t allow it to spawn imitations? What if they limit Singles Day sales to their own online retailers, accessible to anyone around the world at the click of a button?

They haven’t trademarked Singles Day (yet). There is no certainty they can. Or want to. Logic suggests the Chinese would surely want to create worldwide, instantly recognisable modern “traditions” much as the English-speaking world has done for decades. But then again, if Singles Day were to become a global, online, buy-from-China-cheap festival of commerce, that would knock Black Friday somewhat out of the park.