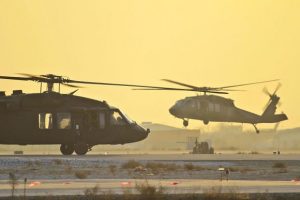 The starkest of the many surprises in US Presi­dent Donald Trump’s National Security Strat­egy (NSS) is its unremit­tingly bleak, unseeing view of the Middle East. It’s a surprise only because one might have thought nearly a year as US president might have recalibrated Trump’s worldview. It hasn’t.

Throughout the 55-page document, the Middle East is depicted as a “safe haven or breed­ing ground for jihadist terrorists,” an area rife with “problems” about which the United States must be “realistic” in its “expectations.”

The Middle East’s only impor­tance to Trump’s America is its continued and future contribution “to a stable global energy market.”

The United States, the docu­ment noted, has learnt from experience that “neither aspira­tions for democratic transforma­tion nor disengagement” can inoculate against the many viruses — violence, jihadism, illiberalism — that spread from the Middle East. “Israel is not the cause of the region’s problems,” it blithely asserted but Iran is a “malign influence” and must be “neutral­ised.”

It says something about Trump’s transactional, zero-sum view of the world and of the Middle East that he sees every­thing only in terms of US inter­ests. For all that it repeats the “America First” mantra over and over, the NSS is really about “Only America,” an ugly, fractious fight to the finish between countries and peoples. A fight that militarily powerful America must win, Trump claims.

Going by Trump’s NSS, there is nothing generous, open-spirited nor uplifting about America in 2017 and on the cusp of a new year. There is nothing admirable either about the America that Trump grandly vows to protect. He portrays the “Land of the Free and the Home of the Brave” as a country that fears almost every­one and everything in “an extraordinarily dangerous world” but especially China, Russia, North Korea, Iran, “radical Islamic terror groups,” US-based students of science and engineering from “designated countries” and the problem-ridden Middle East.

The tone of overweening arrogance would be upsetting if it weren’t so absurd. Trump’s NSS declares “the whole world is lifted by America’s renewal and the re-emergence of American leadership.” The NSS was pub­lished on December 18, the same day as the entire UN Security Council — except for the United States — backed a resolution calling for withdrawal of Trump’s unilateral recognition of Jerusa­lem as Israel’s capital. It was a stark rebuke to Trump’s America and his envoy to the UN, Nikki Haley, recognised it as such with a furious, undiplomatic denuncia­tion of world opinion.

Then again, the day after the NSS, China announced the launch of the world’s largest carbon market. Bigger than Europe’s, the Chinese marketplace for the trading of carbon emissions would allow Beijing to take leadership that might have been American.

That said, there are two margin­ally hopeful acknowledgements in Trump’s NSS. The recognition that jihadists use various means to “radicalise isolated individu­als” and the pious hope for a “strong and integrated Gulf Cooperation Council.”

The first suggests the Trump administration is at least aware of the lone-wolf phenomenon even as it more generally demonises people of the Muslim faith. The second indicates that even so polarising a US presidency recognises there are limits to playing divisive politics among the Gulf countries.

Ultimately though, Trump’s NSS closed out a year that was much like the document he released — chaotic, churlish, callous and conceited. It almost exactly reversed his Republican predeces­sor George W. Bush’s 54-page NSS, which linked America’s security to the global spread of democracy and economic freedoms. It cast the United States in the image of Trump — angry, crass and offen­sive. Unfortunately, in the very worst summing up of a security plan, it may make America less, not more secure.