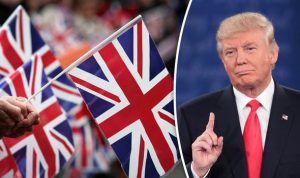 This was in the context of my column for The National, in which I argued that Donald Trump’s transactional approach to diplomacy with North Korea might avert catastrophic war, lessen American influence and self-regard, and the expense Mr Trump believes America unfairly sustains by protecting its ally, South Korea. I honestly believe that war is too dreadful a business to not seek to avert by any means, even if by so undiplomatic and ungracious a person as Mr Trump.

If you’re minded to, please read my allegedly Trumpo-phile column by clicking here.

If you’re not, at least read the rest of this short blog.

The current US president is an affront to America, its values, the Oval Office and the peacetime system, however flawed, of global trade and ties sustained by the US for 70 years.

But President Trump is in office, for the moment.

What he is doing while in office is pretty awful, not least the shredding of ties with close, long-time allies such as Britain.

Mr Trump’s response to the poisoning by a rare Soviet nerve agent on British soil of UK-based Russian former spy Sergei Skripal and his daughter Yulia has been pallid. That’s a generous term. Mr Trump has actually betrayed a manifest lack of support for one of America’s closest allies.

As a Brit (and an American), it is hard not to feel sickened by this development.