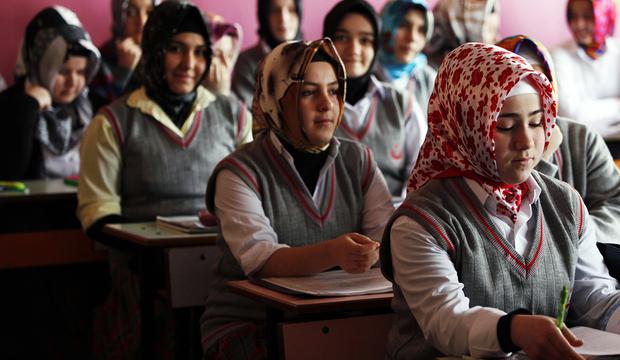 Could it be oversight, cost-cutting, or part of a new cultural war with the West? Could it be simply a turning inward, a rejection of all things foreign?  The New York Times reports that this year’s Turkish-German Film Festival has had to make do without the customary backing of the Turkish Culture Ministry.

For nearly a decade, the festival has been funded by both governments.

What happened this year?

There is much speculation.

The festival director, Adil Kaya, suggests it is a sign that Turkey is “no longer open for cultural dialogues with other countries, especially with Germany.”

Or perhaps, Erdogan’s Turkey doesn’t want the cross-pollination of Turkish and western culture? Sinan Ciddi, director of Georgetown University’s Institute of Turkish Studies, makes the point quite strongly, adding that Mr Erdogan has always sought to promote Islamic culture in Turkey, separate from that which comes from the west.

The Islamisation project is well underway. I urge you to read senior Turkish journalist Yavuz Baydar’s excellent piece on Diyanet, Turkey’s Directorate of Religious Affairs. Click here for the piece.

Originally, as Yavuz writes, Diyanet was meant to “prevent excesses of piety that the state could not control. The military junta, architect of the 1980 coup, beefed up its budget and used Diyanet against the ‘communist threat’.”

But in the nearly two decades since Mr Erdogan’s AK Party won election, Diyanat has served a different function. The AKP has paid close attention to Diyanet’s staffing and funding. Its cadres have been replaced by AKP loyalists and its budget is now equal to that of at least 10 other ministries. Diyanet, which issues the texts of Friday sermons, is also assuming a new importance in running kindergartens.

But then Mr Erdogan has been open about his plan to raise a “pious generation that will work for the construction of a new civilisation.”

Withdrawing from that film festival in Nuremberg is the least of it.