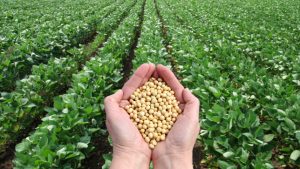 Now that the US-China trade war is kicking off and Donald Trump is getting into his protectionist stride, perhaps we might expect to see fewer innovations such as the following?

A Dutch company using a blockchain platform to sell US soybeans to China.

That’s exactly what happened in January, when Louis Dreyfus Co., one of the world’s biggest foodstuffs traders, used a blockchain platform to sell a cargo of US soybeans to China’s Shandong Bohi Industry Co.

It’s part of a delicately sprouting trend – vegetable-related blockchain enterprises. As Bloomberg reports, in August, a startup called Ripe began tracking tomato quality using blockchain technology. And now comes a Mexican cryptocurrency backed by habanero peppers! The idea, according to the Mexican company Amar Hidroponia is to enable small investors to buy a stake in their product. They started selling digital tokens (each Agrocoin is worth 500 peso or $27) in September and expect to do just fine especially because the habaneros peppers are an integral part of the micro-local cuisine (on the Yucatan Peninsula).

Vegetables and blockchain illustrate the down-home potential of new tech.