May 14 a requiem? US goes from dominance, to leadership, to lead bully boy 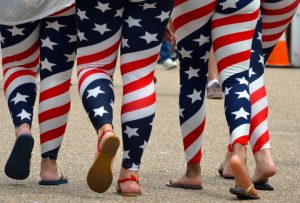 ** The US Embassy in Jerusalem opens.

** And Russia, Iran and Turkey convene a round of Syrian peace talks in Astana.

The first is naturally considered more important. It is, but for more than its immediate effect on people in the immediate area.

It is important because it is the first time an America in decline has boldly  showed its raddled face to the world and challenged any refusal to praise its loveliness. (Refusal to comply with US orders on trading with Iran will be the second through-the-looking-glass moment.) The Jerusalem embassy move is the first time the US is openly, capriciously and callously trampling on the rights of hundreds of thousands of people, even those yet unborn, presuming to call it justice, and daring the rest of the world to object.

When Donald Trump unilaterally announced he would move the US Embassy to Jerusalem, thereby, in his words, taking the issue “off the table”, he seemed to be counting on a number of things to prevent a conflagration. These included:

President Trump was right to presume on all of the above. They exist and have dulled the response to brute US unilateralism on a contested and still-unresolved issue.

However, in so doing, and by moving the US Embassy from Tel Aviv to Jerusalem, Mr Trump may have effected a deeper and more lasting transition – of the world’s imagination. It may have now become possible to imagine things one might not have dismissed before. It has now become possible to see things we didn’t before – of a superpower  transitioning before our eyes. It has gone from pre-9/11 dominance, through to Obama-era leadership, and is now moving to lead bully boy.

The United States is all but removed from even a minimal role as peace broker, judge and arbiter in the Middle East. It may have troops and dollars, which is to say immense power and wealth, but without virtue, justice and humanity, America loses goodwill every day.

T’was famously said, as Britain has since found out, it’s better to have allies than colonies.