What meaning did Meghan Markle’s white wedding dress really have?

That Meghan Markle’s elegant wedding dress was white meant really nothing at all. It didn’t really have any particular meaning, considering Ms Markle was previously married and seemed to be living with Harry before their May 19 ceremony in Windsor.

It was meant to be virginal. Certainly, it had nothing of the symbolic significance Queen Victoria wanted to convey with her own white dress when she married Prince Albert of Saxe-Coburg in 1840. It is Victoria who is considered to have made white wedding dresses popular. After Victoria’s wedding, a popular ladies publication called white “the most fitting hue” for a bride because it represented “an emblem of the purity and innocence of girlhood, and the unsullied heart she now yields to the chosen one.”

Perhaps we should put down the entirely non-symbolic nature of the new Duchess of Sussex’s wedding dress to the way we live now. In the western world especially, bridal gowns and trousseaus are no longer so weighted with tradition and significance. Anything goes, at least anything that the bride wants.

That Ms Markle wore white was probably more to do with popular custom than anything else.

But bridal dresses still have enormous significance in many parts of the world. This was strongly brought home to me in Djerba, the Tunisian island in the Gulf of Gabes. The day before Prince Harry’s wedding to Ms Markle, I stood in the Musee de Guellala on Djerba and looked at the array of dresses worn by brides in different parts of Tunisia.

In some parts, it is white or cream. In others, a heavily embroidered coloured costume decorated with gold and precious stones, with elaborate head-dresses. The Kairouan bride wore dressy trousers and a matching waistcoat (see photograph). It was called the tarayoun. In Djerba, there was the tradition of the elaborately embroidered bskiri shawl. It was worn on the day of the wedding.

Over in Houmt El Souk, literally the market neighbourhood and really Djerba’s downtown, I speak to a bskiri weaver. He shows me the bskiris that are available to buy rightaway. They are no longer elaborately woven like the ones I saw in the Musee de Guellala. In the museum display, were beautiful examples donated by Houmt El Souk  families from weddings that went back to the 1930s.

But the bskiris  on offer at the Houmt weaver’s shop today are plainer – just stripes running in straight lines across the bsikri. In his pattern book, he has many different ones to order and they are more like the older ones I’d seen. Normally, it would take him 10 days to deliver a special order.

That said, the average purchase today, he says, is for 50 dinars (about $20). A silk bsikri with silver thread would run to 300 dinars (about $120) but few would buy that, especially for a shawl that’s worn just once in a woman’s life.

He still makes them though. The bsikri is part of  Djerba’s culture and is still thought to have meaning. 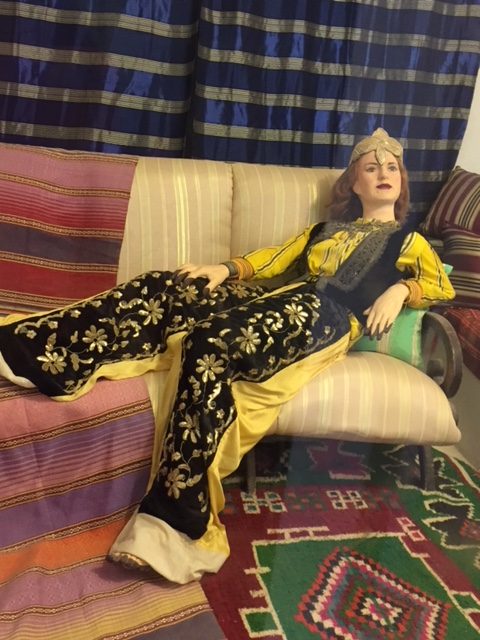