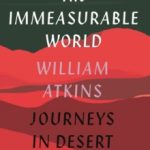 Was the move to the desert an age-old quest – for silence – or was it an equally well-worn instinct for flight – from heartbreak?

At the British Library, Mr Atkins didn’t properly answer the question. However, his newly published book, ‘The Immeasurable World: Journeys in Desert Places’, suggests the travel was both a quest and a flight.

He begins the first chapter thus: “It seems a long time ago. The woman I’d lived with for four years had taken a job overseas. I would not be going with her.”

But then he goes on to write about the connection between Christian monasticism and the desert. He mentions the Desert Fathers, the 3rd and 4th-century solitaries of Upper Egypt. He expounds on the ascetic wish to renounce society by a “step-by-step progression into oblivion”. And then there is this, towards the end of the chapter on the Empty Quarter, Rub al-Khali, the largest contiguous sea of sand in the world:

“The theologian William Harmon Norton, in an essay on ‘The Influence of the Desert on Early Islam’ (1924), tells us that ‘the empty environment offers little food for reasoned thought, surcharged with emotion, the Semite of the arid lands has turned easily to meditation and contemplation of the supernatural’.”

Mr Atkins’ book is being seen as part of a fine British tradition of exploration and commentary, along the lines of Wilfred Thesiger and H. St John Philby. Certainly, he writes beautifully – and with great sensitivity towards all that he sees, hears, feels – but I’m not sure he should be stood alongside travellers of the late 19th and early 20th century. For one, he is in a different age and, of a different age.

As he writes early on:

“It has become difficult to be a pioneer. The world has been done. There are only the adventurers now, this new breed of fanatic: rangy, large-toothed guys seeking, not knowledge or even territory, but novelty, managed suffering, ‘experience’, material, sponsorship – K2 by canoe, the Amazon by bike, the North Pole on stilts. And then there are those who seek out the footsteps of the surveyors of the epic era.”

That is what Mr Atkins sets out to do – walk in the footsteps of Bertram Thomas, Philby, Thesiger et al. But by doing it his own way, and with 21st century tools and ideas, he sets himself as apart from them. That’s all to the good.