A third way? Could centrism once again gain ground?

As 2017 died, Daniel Finkelstein in The Times offered a dispiriting view of western politics (or, at least of Anglo-Saxon politics). Centrist parties had practically no future, he argued. It was fine to aspire to being a niche party, something like Nigel Farage’s UK Independence Party. You could hoover up a special interest group and represent it wholly if not exclusively. Like UKIP, a niche party can expect to attract a solid, if small proportion of the vote. (UKIP had 15 per cent. It’s another matter than in the months since, and especially after local elections in England, UKIP’s own general secretary admitted the party had slid into irrelevance and was “like the Black Death”).

But back to Mr Finkelstein’s argument, eight months into 2018. A niche centre party, he said, could plausibly and credibly “supersede the Liberal Democrats” and do pretty well.

But…and here came the doom and gloom for the year that is already, mostly over. Mr Finkelstein saw no future for a “broader centre party” because he thought it overly  hard to represent “the very disparate interests of every disaffected protest voter”.

Would it be, he asks, the “party of urban voters or rural ones? Affluent or less affluent? Graduates or school leavers? Old or young? Homeowners or renters?”

Well, yes. All of them. And then some.

For all that British (and American) politics seems intensely polarised, it’s not as if society is only composed of special interest groups.

There is something called the common weal. 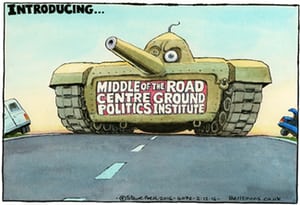