They say we should not speak ill of the dead. Surely that applies to John McCain too?

Call me naïve, but the bile being heaped upon US Senator John McCain, who died on Saturday, August 25, is extraordinary, unbecoming and de-humanising.

The late senator had a storied life, rich in principled endeavour and energy and bristling with acerbic commentary and trenchant opinions on the issues of the day.

He was a flawed human being, as are we all.

So yes, John McCain argued after 9/11 for a wider war on terror in the Middle East. And yes, John McCain tried in 2008 to argue a voter out of her fear of Barack Obama as “an Arab” by saying, “no, ma’am, he is a decent family man”.

Arab-Americans now say that exchange somehow legitimizes American anti-Arabism. They say McCain indicated being Arab was exclusive to being a decent family man, but I see it differently.

What Senator McCain was saying, pithily, in the few seconds he could expect to have that troubled voter’s attention, was that Barack Obama is a decent person, he’s one of us.

One can understand the hurt expressed by some Arab-Americans.

Someone tweeted as follows, referring to a clip from 2008, which can be found by clicking here:

“As an Arab with a decent family man Arab father it hurts me every time the media plays this clip.”

“I realize McCain was on the spot and was dealing with a troglodyte, but Arabs are good people. We are constantly portrayed as “the other” and this shows that.”

For those who haven’t watched the clip, it’s basically McCain talking to an older white lady in a red dress, on the campaign trail in 2008. She expresses fear of Mr Obama because he’s “an Arab”, to which McCain answers: “No, ma’am. He’s a decent family man, citizen, that I just happen to have disagreements with on fundamental issues, and that’s what this campaign issue is all about.”

We can argue that McCain should have been more insistently inclusive. That he should have told the voter, “what’s wrong with being Arab? They’re decent family-types too. And by the way, Obama isn’t Arab. He’s American.”

My sense is it wouldn’t have worked.

McCain had 30 seconds to reassure the voter, reaffirm her faith in the two-party system and the candidate put forward by the Democratic Party. He had a sliver of an opportunity to persuade an older voter that a visually distinct presidential candidate was not so alien to America as to be wrongly ‘othered’.

Had McCain launched into a defence of Arabs, he would have taken away the simple punchy message he conveyed. No ma’am, he’s not the other though he doesn’t look like you or me. But he’s just a decent family-minded American.

In the few seconds available to a politician to convert a voter away from misguided thinking, McCain did what he could.

So, what of McCain’s recommendation the US launch multiple wars in the Middle East after 9/11? The best way to understand it is that he was a man of his times. Not a perfect being, just someone who lived in and articulated the sensibilities of his times.

Finally, there is Donald Trump’s disaffection with McCain. The 45th US President has made no secret of his animosity towards McCain. It was evident in McCain’s lifetime, it continued during his fatal illness, and it has outlasted the senator.

Mr Trump must make his own peace with the First Cause, God, or whatever you want to call the reason we’re all here on earth.

But his lack of graciousness towards a dying, now-dead man is vile, exceptionable and de-humanising, even as we try and make a decent fist of being human. 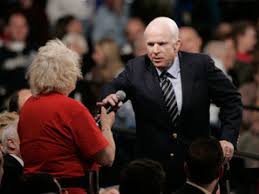