If we want to save Britain from its post-Brexit economic fate, we should support Theresa May’s investment in Africa 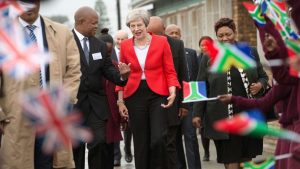 Theresa May has joined in a new scramble for Africa but this one is neither wholly European nor intentionally and hideously opaque as in centuries past. In fact, May is pretty upfront about Britain’s hopes and aims in Africa, as she visits the continent’s three largest economies — South Africa, Nigeria and Kenya.

Brexit Britain, which has adopted the hopeful, if somewhat meaningless label “Global Britain”, wants to invest in Africa and get quite a bit back for its trouble. “I am unashamed about the need to ensure that our aid programme works for the UK,” May said in Cape Town. Development spending must “support our own national interest”. We must ensure “our investment in aid benefits us all”.

What this could mean in practice is that British overseas aid — currently 0.7 per cent of GDP — will be used to help develop certain sectors in which private UK businesses will subsequently invest.

Some have seized on the faintly unpleasant whiff of aid-for-trade monopolies, or tying British assistance to contracts for British companies. But there is nothing to suggest Britain will seek — or gain — any special rights as a result of its altruism. Even so, criticism of May’s candour has been swift. “What a mean, selfish nation we’re becoming,” tweeted someone who may be soft-hearted and generous, but is also probably quite impractical

The truth is Britain cannot afford grand gestures and largesse anymore. But it wants to discourage uninvited migrants and with Brexit drawing ever closer, is desperate to develop economic links with other parts of the world.

The narrowing of British concerns — which may seem like selfishness to some — is in line with political developments in other Western countries. The backlash against immigration and increasingly racially-tinged political discourse in the West underlines the need for new solutions.

This is the context of targeted aid to stimulate trade and economic growth in Africa and enable Africans to stay where they are rather than migrate to the West. It is exactly the sort of investment Britain and other former colonial powers need to be making in Africa. For Britain, this is especially true in countries with which it shares a somewhat shameful past relationship — one built on racist dominance, extractive processes and divide-and-rule policies that still disfigure their societies, economies and politics.

In July, a Swiss-financed tourism initiative went into operation in southeastern Tunisia with the aim of creating local jobs and incentives to keep Tunisian youths home rather than bound for Europe. The Swiss allocated $4m and oodles of thought to the plan and bluntly told me that “it’s meant to contain illegal immigration” by creating opportunity in Tunisia.

British investment in Africa could have a multiplier effect on pretty much the same principles of creating jobs and opportunity at home. After May’s Cape Town speech, a leading member of the South African Chamber of Commerce said South African agriculture was one example of a sector ripe for British aid and advice. It needs institutional reform, innovation and improved training, and any South African gains from British investment could benefit the people of both countries. Or, in May’s words, “maximize shared opportunities”.

The impact could be considerable if even a portion of that aid were used in sub-Saharan Africa to build trade capacity, which is exactly what the World Trade Organisation commends about the concept of aid-for-trade.

As May has noted, the human impact of not doing so is stark. It would mean a downward spiral in Africa from “a loss of faith in free markets and democracy … to greater conflict and an increased susceptibility to extremism”. Poor countries in and next to conflict areas and war zones would hemorrhage people, who will inevitably find ways of getting to the stability and plenty of the rich world.

In the circumstances, an emerging quid-pro-quo between rich and poor countries is the only way forward.